The Schnoodle is the cross-breed of poodle and Schnauzer. They arrived on the scene in the 1980s. When it comes to a designer dog breed, Schnoodle puppies are the perfect example of a cute and adorable puppy. These small dogs are packed with a high dose of energy. You won’t find them dull or lazy at any time of day. They remain active no matter what time of day it is. 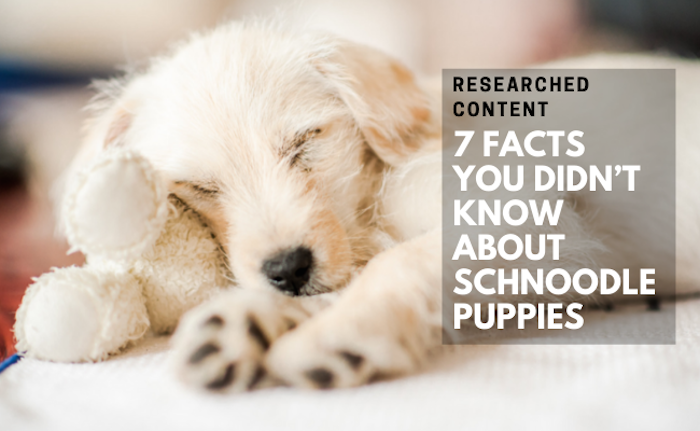 We Love Doodles so if you are considering getting a Schnoodle puppy, before making them a part of your family, read these interesting facts about Schnoodle puppies.

Don’t make the mistake of treating Schnoodle puppies like the other puppies. They are entirely different from others. Schnoodle puppies are considered one of the most intelligent puppies. For that reason, Schnoodle puppies are thought to be easier to train than most dog breeds. Apart from this, they are also eager to please (with or without a treat). They listen carefully to your instructions and act accordingly. Indeed they are the smartest dogs ever!

Schnoodles have thick hair which sheds very little. This characteristic of Schnoodle puppies is extremely beneficial for allergic sufferers. Like other Poodle crossbreeds dogs, Schnoodle puppies are considered hypoallergenic dogs.

It is advisable that if you have allergic to dogs, you should spend some time with Schnoodle dogs before making a final decision.

Schnoodles require a minimum of 30 to 60 minutes of exercise a day. Schnoodle will do best if they can play fetch for 30 to 60 minutes at a time. Regular exercise is really important for Schnoodle puppies. If they don’t get a proper body workout, they may become obstinate, rebellious, aggressive, and may suffer from other behavioral issues.

Breed associations such as CKC, UKC, and AKC don’t recognize the Schnoodle as a true dog breed. In fact, none of the designer dogs is recognized by the breed associations. However, some kennel clubs have accepted the registration of mixed-breed dogs which can be used for various performance events such as obedience and agility.

There are some conditions that are genetic in dogs. This means if the parents of crossbreed have these conditions, chances are that their offspring may also develop. For instance, the majority of poodles suffers from hip dysplasia, epilepsy, progressive retinal atrophy, bloat, and thyroid issue. On the other hand, Schnauzers are likely to develop hip dysplasia, kidney stones, and pancreatitis. Hip dysplasia is there in both parents, which means the offspring that is Schnoodle will likely to develop hip dysplasia which can be treated easily.

To Sum It Up

A Schnoodle is an affectionate, intelligent, and active dog that can be a perfect addition to your family.