Where Can You Get a Chinchilla?

If you’ve decided on looking into getting a chinchilla as a pet, you’re probably wondering about the best place to find one. Many chain pet stores carry chinchillas, as well as many of the supplies you’ll need to ensure your new pet has the proper care and environment. Some pet stores that carry chinchillas do not display them as chinchillas are nocturnal and the noise of customers during the day often disturbs them. It is also possible to buy a chinchilla from a respected breeder and this may be a better option for some as you can easily see the animals in their home environment when they’re naturally awake and active. This also gives you the option of learning about any health issues that a particular chinchilla may have. A third option is to adopt a chinchilla from a chinchilla rescue center in your area. Chinchillas at rescue centers are often more mature and already tame so this is a good option if you’re not inclined toward taming a chinchilla yourself. 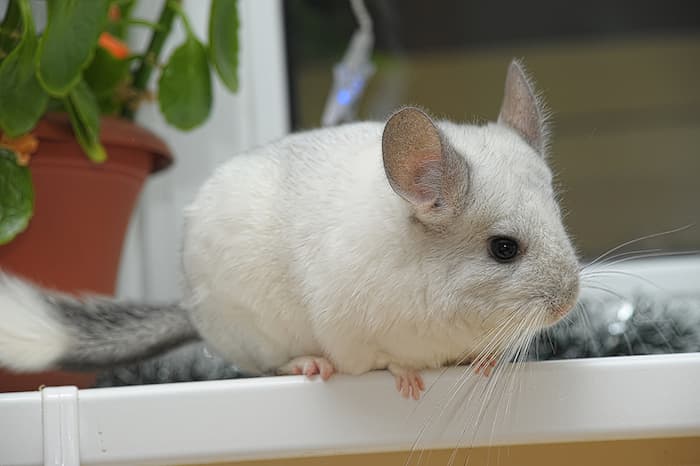 Chinchillas will require a large cage in order to be comfortable. The cages that are usually sold in pet shops as ‘chinchilla cages’ are often too small for a grown chinchilla to move around comfortably.

Like all animals, a chinchilla will need a food dish and a source of water. The food dish must be heavy enough to support the chinchilla as they sit on the edge of their bowl in order to eat. This means that the dish will have to be either sturdy enough to support the chinchilla’s weight or else be clipped to something to avoid tipping over and spilling the food. Some chinchilla cages feature a hole in the frame which the food dish slides into. These designs are very practical for cleaning the dish and refreshing the food without opening the cage door each time.

A water bottle typically used for mice is a good choice as these are often ‘gravity’ bottles that are designed to prevent leaking. Water must be changed and the bottle must be cleaned every day to avoid a build-up of bacteria in the straw. Tap water is not advisable to use as it often contains chemicals that can be harmful to a chinchilla’s system. The best way around this is to give them cooled, bottled tap water. 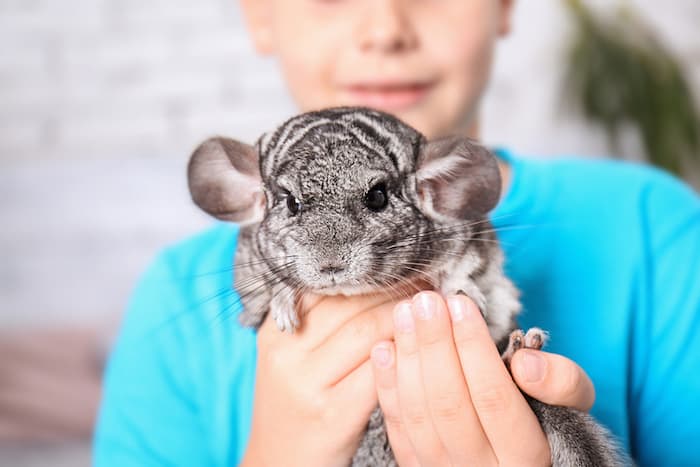 Chinchillas require objects to gnaw on in order to keep their teeth in good health and avoid severe dental problems that can become life-threatening. Giving your chinchilla pumice stone, cuttlebone, or hard wooden objects made of chinchilla-safe wood to gnaw on will help keep their teeth, and the rest of them, healthy.

Shelving secured to the sides of cages is very important for chinchillas to jump onto and rest on. This is especially important is you’ve gotten a cage that is wire all around, including the base as walking on the wire for an extended period can cause chinchillas a very painful foot problem called Bumblefoot.


Chinchillas will also need something soft to rest on and relieve the pressure of walking on hard shelving or the cage floor all the time. It’s very important that whatever soft material you chose is not harmful to the chinchilla as they will chew and gnaw on anything in their cages. A soft, folded towel is a good, cheap option as it can be washed regularly.

A small house within the cage is very important as a chinchilla needs a place to feel secure and sleep. The safest houses are either hay or untreated pine wood. Many of the houses found in pet stores are made of cheap plywood which can splinter when chewed on. these are best avoided as they can be harmful. A cheap solution is to use a small cardboard box as a house. It will be destroyed quickly but can be easily replaced, and has the benefit of acting as a plaything since it can be tossed around by the chinchilla. 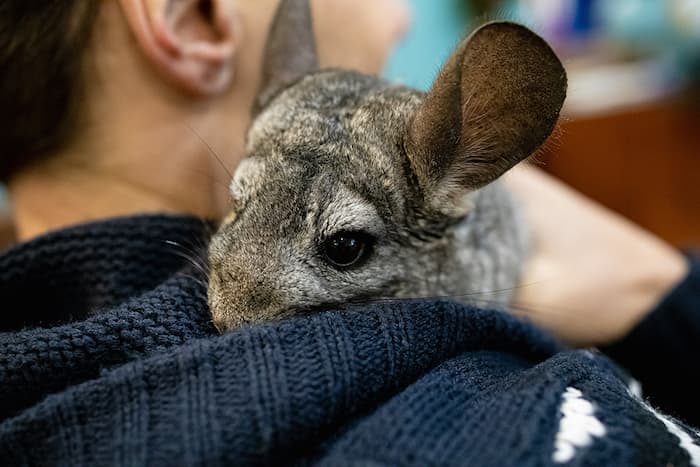 Set up a Chinchilla Cage Habitat

When setting up your chinchilla’s cage, it is very important to hang their water bottle on the outside as this prevents chewing, which can cause leaking, and removes the possibility of the chinchilla knocking it down while running around their cage. Chinchillas are very active and will run around their cage at high speed, so take care when placing their house. If you must have the house on a shelf, first check that the shelf can support the weight of the house and then secure the house to the shelf to prevent it from falling. It is also important to have a properly sized sheet to place over the cage while the chinchilla sleeps as this helps them to feel secure and will help to keep them stress-free.

A hay rack is not essential but chinchillas are prone to scattering hay around as they eat which can be dangerous to them if left on the floor of their cage as they may slip on it. A hay rack that clips to the side of the cage will help to avoid a mess and a potential disaster. Hay cubes are another way to supply your chinchilla with hay. These are also a good option as chinchillas will often play with them as well as eat them. Hay houses are another option but care should be taken as the metal wires the house is made from can cause injuries when the hay is gone.

Chinchillas do not bathe in water but instead roll in volcanic ash to clean their fur. Chinchilla dust made specifically for dust baths is sold at most pet stores. The dust should be placed in a container big enough for the chinchilla to roll around freely. The bath should be at least 2 inches deep and should be provided daily for about five to ten minutes. A dust bath should not be left in the chinchilla’s cage after ten minutes, though, as the chinchilla is likely to urinate in it. Dust baths can be reused if this hasn’t happened. Simply use a fine sieve to strain any debris from it and place the clean sand back in the container. The dust should be replaced every three uses. 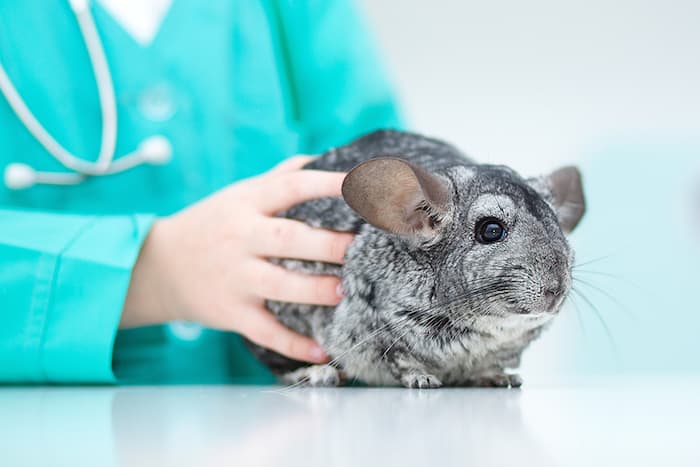 How Often and What do Chinchillas Eat?

Chinchillas are herbivores and can get very ill if their diet does not meet their nutritional needs. Hay is a very important part of a chinchilla’s diet and it’s important that they have fresh hay to eat at all times. Alfalfa, alpine, orchard grass, timothy, bluegrasses, and common prairie grass are the best choices for feeding chinchillas. Good grade alfalfa contains about 14% protein and is a very good option. Any ‘course’ hay that falls in the range of 14 to 16% protein is also good as the extra chewing required helps to file the chinchilla’s teeth and prevent dental problems. It’s important that you only feed your chinchilla pellets made for chinchillas. Food pellets made for other animals such as guinea pigs and rabbits may have ingredients added which can be harmful to chinchillas. One to two tablespoons of these pellets should be given daily. 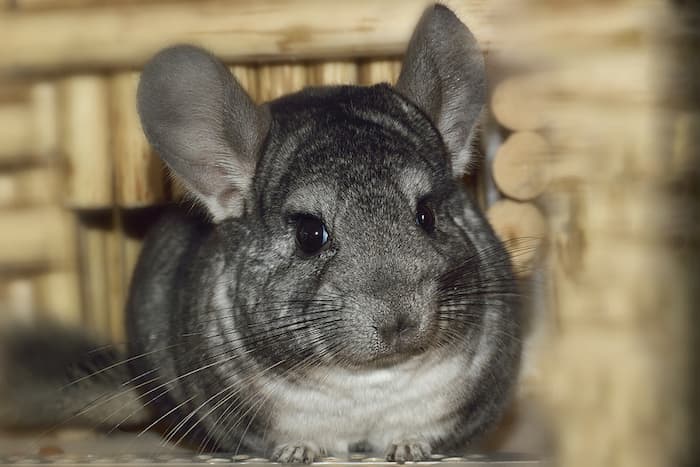 How to Keep a Chinchilla Healthy

Chinchillas are generally strong animals when it comes to health but they can fall prey to issues like any other living thing.

It is important to take good care of your chinchilla’s teeth. Giving them safe objects to gnaw on and making sure they have good-quality course hay will help to keep their teeth filed and thus avoid dental problems.

While chinchillas will not overeat on pellets and hay, they will overheat when given treats, which can lead to issues like fatty liver and even death. Giving a chinchilla a diet outside the 14 to 16% protein range can also cause them health problems so it’s important to pay close attention to the nutritional values of the food you give them.

Dust baths are very important. Without baths, a chinchilla’s skin may become greasy and this can lead to serious skin conditions if not treated quickly.

Stress can cause a chinchilla to pull its fur out and lead to disturbed sleeping patterns. Make sure that you have a sheet to cover their cage with during sleeping hours and avoid causing the animal undue stress by handling it past its point of comfort. 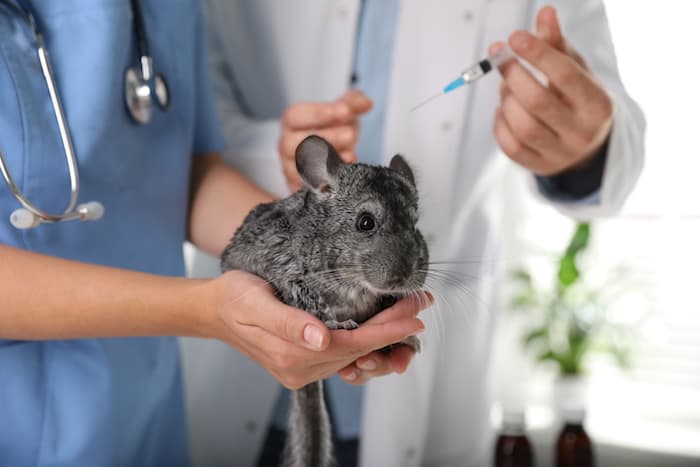 Advice on Holding and Taming a Chinchilla

Chinchillas must be approached slowly, especially if they are not used to you. It takes time to build a bond of trust that will allow you to touch the animal freely. It’s important to allow the animal to get used to your presence and your voice before you attempt to touch it. Once it’s comfortable enough with you that it readily comes up to you, it’s generally a sign that you can now touch it. When holding a chinchilla, always support the legs and hold the animal firmly, close to your chest. They feel more secure this way and are less likely to dislike being picked up afterward.

| Home | How to Take Care of a Chinchilla

1 thought on “How to Take Care of a Chinchilla”