Reptiles make fascinating pets, but each species is fascinating in its own way. Pet owners can marvel at the beauty of a snake, but snakes don’t do much besides lie there and look beautiful. Turtles can be beautiful, but even the babies can be surprisingly short-tempered. Keeping even a baby crocodile or alligator isn’t for the faint-hearted. Lizards are the one reptile pet that seems to pay their humans some mind. Indeed, there are some that seem to find humans somewhat interesting. Granted, the reason may be that humans bring the food. Whatever is going on in the lizard’s head, even their minimal interest in humans makes their owners adore them. 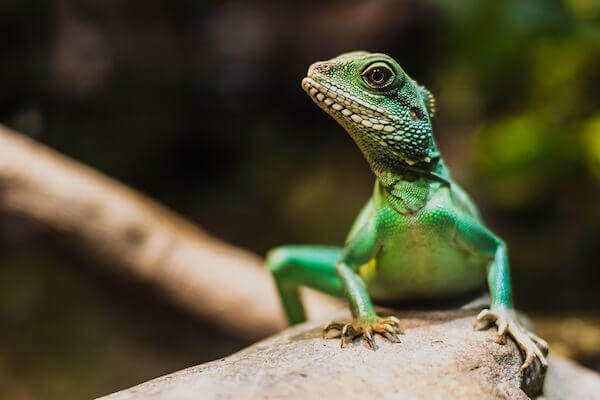 Despite their name, these lizards are docile and people-friendly. They grow to about 22 inches long and come in different colors, with gold and red being the most popular. Unlike some lizards, bearded dragons can live in groups. They do best in a hot vivarium and appreciate a basking light. They’re omnivorous and enjoy fruits, vegetables, edible flowers, and bugs. A bearded dragon can live as long as 20 years in captivity. 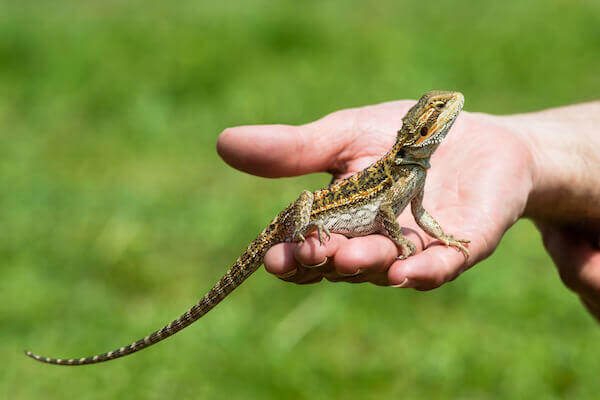 Most geckos don’t make good pets because they are very quick and make great escape artists. The leopard gecko does not move very fast and lacks the toe pads that allow other types of geckos to cling and climb up anything, including glass. It’s also attractive, with a golden body and black spots that give it its name. Hatchlings have bands, and as they grow these bands break up and form spots. They don’t need a tall vivarium, but they enjoy a hot one. The basking light can be as high as 104 degrees Fahrenheit, but the night time temperatures should fall back to about 68 degrees F. Leopard geckos can grow to be 10.8 inches long, are carnivorous, and can live as long as 20 years. 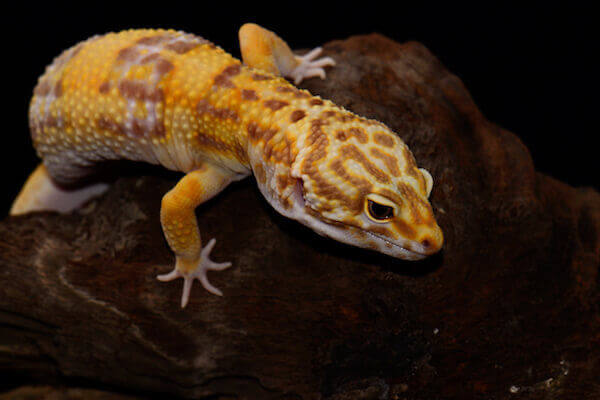 Yes, this animal really does have a blue tongue. It’s can also grow to over one and a half feet long. But despite its heft, this lizard is quite docile. It’s an omnivore and can live between 15 and 20 years. They’re not very social and should be kept one to a vivarium. Males especially shouldn’t be kept together. 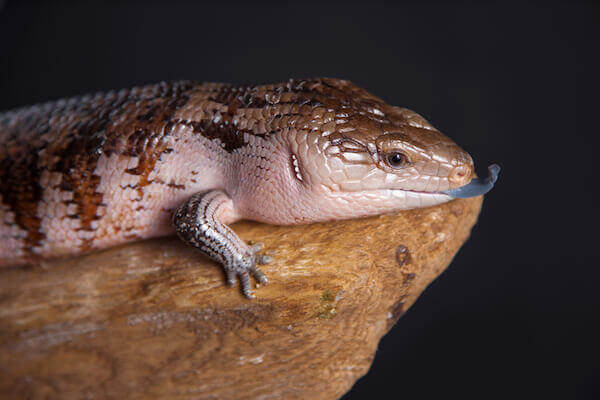 Though these lizards are sold in pet stores, the problem with them is they are very hard to catch. If an owner grabs one by the tail, the tail will not only snap off but keep on wriggling for a few moments. If a person does manage to catch a whole lizard, it may bite and hold on. Anoles, mistakenly called chameleons because they can change color, are smallish. The males grow to about 8 inches, though most of that is tail. They eat insects and spiders, and wild ones that get into houses make great pest control. In captivity, the green anole lives about six years. 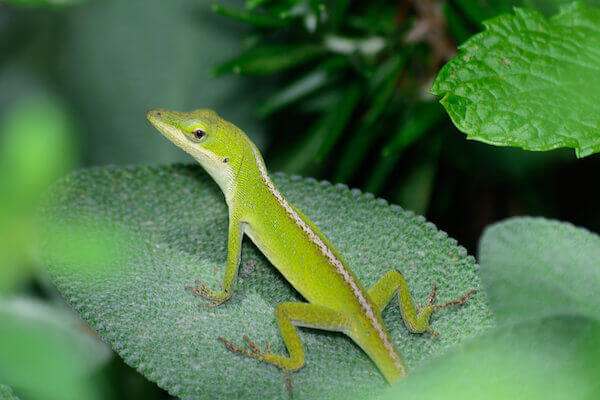 Iguana hatchlings are cute, but when they grow up they can be a handful. Only experienced lizard owners should keep an adult iguana. Even if they were not as temperamental as they often are, a grown iguana can grow to six feet in length. A full-grown male with a characteristic dewlap is especially aggressive, and owners have been known to have them neutered. A well-cared-for iguana can live for 20 years in captivity. 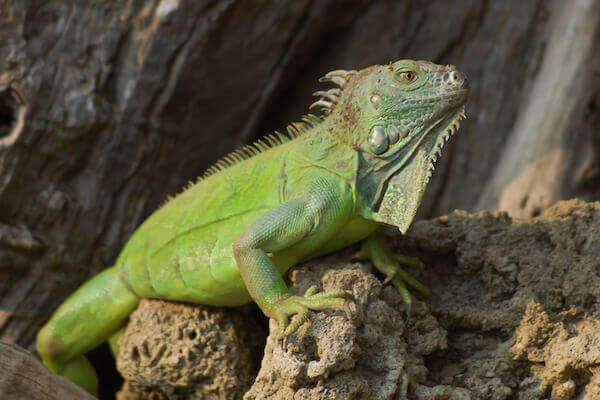 How to Set up a Lizard Habitat

Like all reptiles, lizards are cold-blooded, which means their body temperature depends a great deal on the temperature of the air. This means it’s up to their owner to make sure that they stay warm. This is best done in an enclosed environment called a vivarium, which is made for cold-blooded creatures. Because it doesn’t need to be half-filled with water like an enclosure for a turtle, a vivarium can have a sliding door made of glass or another easy-to-clean, transparent material. It also needs grilles for ventilation.

Heat and light can be provided by a spotlight attached to the roof of the vivarium. The light should be inside a cage that protects climbing lizards from burns. A heating element that can be controlled by a thermostat can also be installed and is preferable to a light that gives off the same amount of heat both night and day. Lizards benefit if their habitat is a bit cooler during the nighttime.

The lizard should also have full-spectrum lighting, which is the light that provides both ultraviolet A and B radiation. UVA light stimulates feeding, and UVB light helps the lizard’s body produce vitamin D3, which also controls the levels of calcium. These full-spectrum lights need to be replaced after about nine months or so. The owner won’t be able to tell just by looking at the light that it needs replacement.

The layout of the vivarium depends on whether the lizard’s natural habitat is a forest or a desert. Calcium sand is a good substrate of a desert-dwelling lizard. It won’t hurt if the lizard ingests some of this sand along with its food. Chipped bark is good for forest-dwelling lizards. Real plants, branches, and large pieces of bark are places for lizards to hide when they need to. The owner should make sure the plants are safe and non-toxic. There’s also a risk that real plants will be munched on by herbivorous lizards. A vivarium that’s taller than it’s wide and stocked with long branches or other things to climb is good for lizards that live in the trees, and slabs of peat moss can be placed in the vivarium and misted now and then to control the humidity levels.

How to Feed a Lizard

Another thing that makes lizards for beginners easy to care for is that they have food made especially for them. These foods, which are often in the form of pellets, can be bought in the pet store. They can be eaten dry but go down better if they’re moistened a bit before they’re fed to the animal. The lizard should still be offered a variety of foods. These include sprouts and vegetables such as cabbage and carrots. Some lizards readily eat fruit such as grapes and apples. The food should be cut into bite-sized pieces.

Lizards eat every day, unlike some other reptiles. Food should be offered in a bowl that the lizard can’t tip over and can be sprinkled with vitamin or mineral supplements for added nutrition. The owner should read the label to see how much to add.

Lizards that eat mostly insects especially need supplements, since the insects won’t provide all the nutrition they need. Owners should feed their lizards their usual ration of insects, supplement this with smaller insects or sprinkle the insects with vitamin powder before offering them to the lizard.

The most popular insects to feed to lizards are crickets, which can come in different sizes, mealworms, and wax moth caterpillars. If the wax moth caterpillars are allowed to pupate and turn into moths, these moths can also be fed to the lizards. Some lizards seem to find it fun to catch the moths when they’re placed in their vivarium. 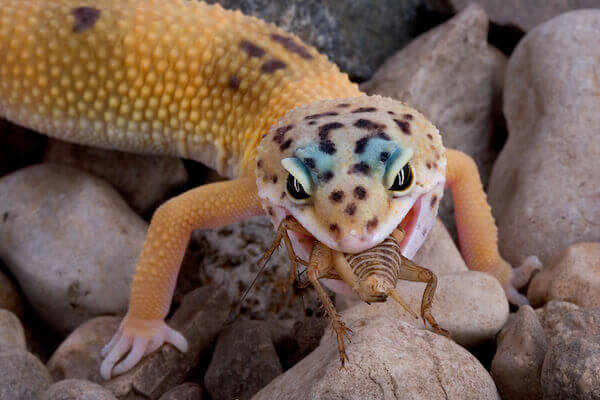 What Types of Illnesses do Lizards Get in Captivity?

Like many animals, lizards are fairly stoic when they’re not feeling well. One reliable sign of illness is if the animal suddenly has a poor appetite, loses weight, and seems apathetic. An owner who suspects their lizard is unwell should take it to a reptile veterinarian.

The more common maladies that afflict captive lizards are internal parasites and mouth rot, which stops the lizard from feeding normally. Mouth rot can be treated, but the animal may need to be anesthetized first. Some lizards may have trouble molting, or shedding their skin. Raising the humidity level in the vivarium can help. Lack of calcium and vitamin D can lead to metabolic bone disease, and unsanitary conditions can put the lizard at risk for pneumonia.

Keeping the vivarium scrupulously clean, making sure that the lizard gets the proper nutrients and is not stressed by a habitat that is too warm, cold, or crowded goes a long way in preventing illness.

| Home | How to Take Care of a Pet Lizard

5 thoughts on “How to Take Care of a Pet Lizard”