Hedgehogs and porcupines, though often confused, are very different creatures. Apart from their enthusiasm for acupuncture, they are entirely different species who have merely developed similar reactions to physical threats over the years.

What is a hedgehog?

A hedgehog is a small carnivorous mammal, that can measure between six inches to one foot in length and is roughly similar in size to a pet guinea pig. Their most striking visual feature is certainly the hard, sharpened spikes, also called spines, on their backs. These are a type of defense mechanism used to deter predators. If a hedgehog feels threatened, they tuck themselves into a small ball, covering their vulnerable body parts and exposing their sharp, spiky exterior. Because they are nocturnal, they also are known to sleep in this defensive position as well. There is a lot more to hedgehogs besides their spikes, though.

Their name comes from an appropriation of their foraging behavior, which early peoples found similar to the behavior of foraging hogs. They make similar grunting noises while rustling through hedges for the small bugs, rodents, and occasional amphibians that comprise their diet. Hedgehogs utilize their great sense of smell to compensate for their poor vision.

Occasionally found in gardens and increasingly kept as pets, hedgehogs are known to keep largely to themselves in the wild. They are solitary animals, born in litters of about a dozen, and only remaining in their nest for about two months prior to embarking out into the world.

What is a porcupine? 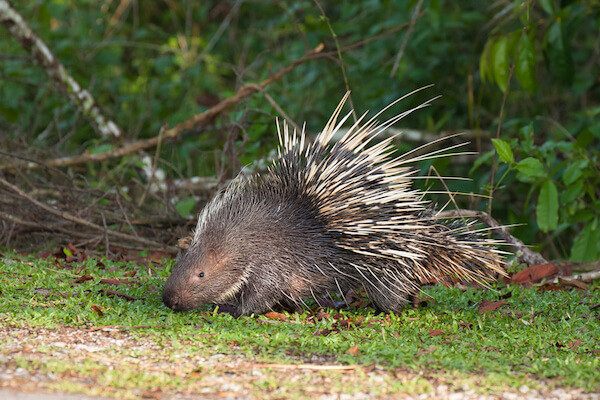 Porcupines are mammals, that can be two to three feet in length, not including their tail, which can measure just under a foot in length. The size can roughly be compared to that of a domestic house cat, but that is about where the similarities end. A porcupine’s hair is soft, but it’s back is covered by a thick layer of needle-like quills. The quills vary in length with the species, but can be up to twelve inches in length. They begin as hairs grown within the first few days of birth, but quickly harden to form their primary defense system. The porcupine can perk up, and even eject the quills at attackers when it feels threatened.

North and South American porcupines largely live on branches and eat small twigs and tree bark. They have tails similar to possums that can wrap around branches for better climbing grip. Eurasian and African varieties can inhabit a large variety of environments from wooded forests to deserts and typically have shorter, less specialized tails. No matter where they are found, porcupines have a feisty nature to contrast their herbivore lifestyle.

How are They Similar?

The obvious comparison between hedgehogs and porcupines is their spines. The backs of both mammals are covered in sharp points and used for their protection. Another similarity can be found in looking at the Latin root of the name porcupine, which translates to “quill pig,” meaning both animals have a historic comparison to swine. Like the male and female versions of swine, the male and female gendered porcupines and hedgehogs are called boars and sows respectively. Hedgehogs and porcupines each make vocalizations comparable to pig grunts as well. 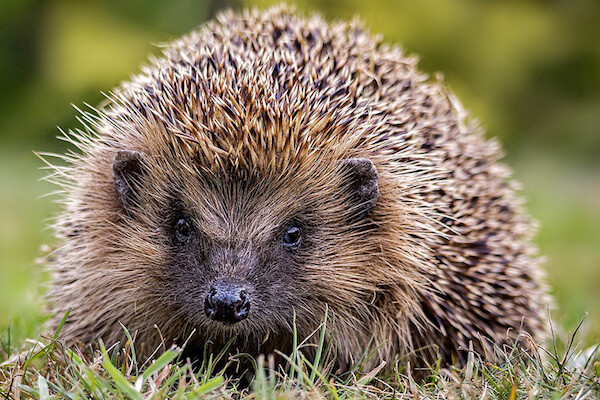 Other similarities stem from their independent nature. Neither hedgehogs or porcupines are social creatures and spend the large majority of their lives alone. Both can be found in several different climates and geographic locations around the world. Though they consume different diets, both animals find their food by using their great sense of smell to make up from their limited eyesight. Eyesight is not essential for either animal because most varieties of each are nocturnal.

How are They Different?

While it might be tempting to conflate images of the two mammals, they have less in common than most people imagine. There are many important differences between the animals both in appearance and behavior.

Porcupines are much larger than hedgehogs, weighing much more and growing to almost four times the length. For reference, the average weight for a hedgehog is just under two pounds while some species of porcupines weigh easily over thirty-five pounds. Any easy way to visually distinguish between the two species if size cannot be accurately determined, is to look at their noses. Hedgehogs have what could be described as berry, or button noses that extend from a tapered snout and porcupines have large pronounced nostrils similar to that of a large rabbit or small dog. Porcupine noses are typically snubbed and pink, in comparison with a hedgehog’s rounded brown nose. Their feet are very easy to distinguish between, and follow suit with the rest of their nature. Hedgehog paws are petite with short ineffectual nails. Porcupine feet are wider with long, strong claws that are better for climbing and stripping bark. 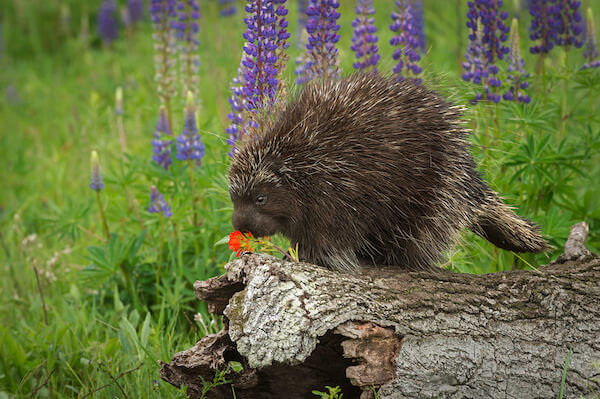 In terms of behavior, hedgehogs and porcupines have different diets, quill types, and many other attributes. Eating only plant-based natural material, porcupines are vegetarians. In contrast, hedgehogs typically leave vegetation alone and rather eat the small insects and snails that bother plants, making them the perfect tiny guardians little guardians. This, paired with their small size and mild-mannered demeanor, make hedgehogs a relatively popular house pet. Porcupines, however, would make terrible pets because they are too large and much more aggressive.

Their quills can become dislodged when they are attacked, but hedgehog quills are much more permanent. Knowing this, porcupines have avoided being the target of many predators over the years while hedgehogs are known to supplement the diets of large rodents and carnivorous birds.

Porcupines do not hibernate, and are found active even in cold climates. Hedgehogs hibernate through most of the winter. That being said, a majority of porcupine species are found in more tropical regions, making their winters less harsh. Hedgehogs are born in large litters, but porcupines are born in litters as small as one sometimes and their period of gestation is several weeks longer.

The animals, though both adorable and important, are not related. That being said, the world is certainly big enough for them both.