Goldfish dropsy is not a medical term and it’s not technically considered a disease. The term refers to the combination of symptoms that ‘dropsy’ will display. The symptoms of dropsy are the result of an internal bacteria infection in the kidneys. The infected kidneys retain water, become swollen and throw of the homeostasis of the goldfish’s osmoregulation. Osmoregulation is the ability of a goldfish to keep its internal fluids in balance with the external water. In the late stages of dropsy, a goldfish will have a swollen belly so severe that its scales are raised outwards. A sick goldfish with dropsy may or may not have problems swimming but it typically becomes lethargic, has a loss of appetite, and just looks unhappy. 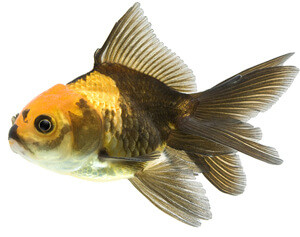 The problem with curing a sick goldfish with dropsy is that most obvious symptoms are a sign of late-stage dropsy; most cases at this point are terminal and no goldfish care is likely to help. Even if you are able to treat the infection with antibiotics, complete organ failure can likely follow. However, if dropsy is caught early on, a goldfish can survive. Take the sick goldfish and place it into a quarantine tank for treatment. Dropsy isn’t contagious which means it’s not necessary to treat all the goldfish in the tank. In the quarantine tank, add 2 teaspoons per ten gallons of Epsom salt to help draw out excess fluids in the goldfish. Epsom salt is different than regular aquarium salt because it contains magnesium sulfate, not sodium chloride. Next, add Maracyn Plus AntiBacteria Therapy or Kanamycin to help treat gram negative bacterial infections and feed the goldfish with antibacterial food or soak fish flakes in Neomycin.

Most cases of dropsy are diagnosed too late and lead to the death of the goldfish; prevention of dropsy is the best option. Perform regular water changes and maintaining optimal water parameters. Keep the stress of the goldfish to a minimum by proper handling and proper aquarium setup. Use an Aquarium Pharmaceuticals Stress Coat whenever a goldfish losses a scale, gets a scratch, or even looks depressed.

| Home | How to Take Care of a Goldfish | Goldfish Dropsy Disease