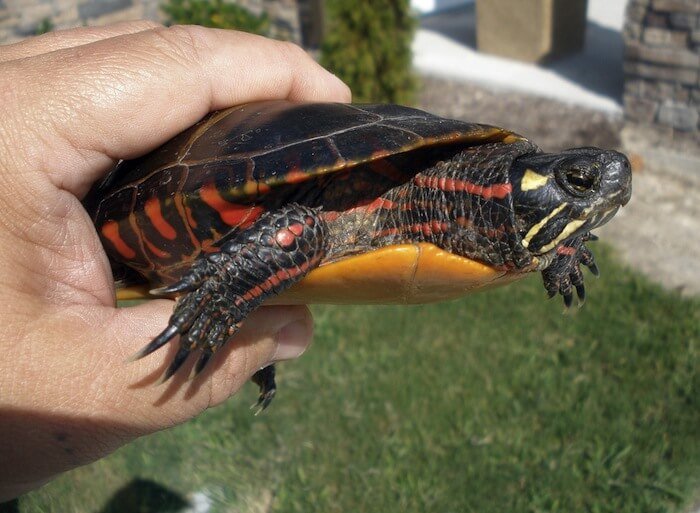 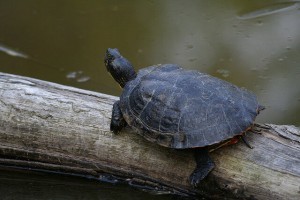 Learn more about how to take care of a turtle.
Most aquatic turtle species prefer to live in water between 75-85*F but many species will adapt and can live in cooler water. Aquatic turtles begin to hibernate in the mud on the bottom when the water temperature drops below 50*F. Many pond keepers in climate regions below 7 will winter their smaller and less hardy pond turtles indoors.

Different breeds prefer different depths of water but all of them will need a place where they can crawl out of the water to bask in the sun. Turtles are cold blooded so they need to warm themselves in the sun. Adding a semi submerge log creates a ramp for the pond turtles to crawl up and bask on. Other options can include a floating island or floating aquatic plants. By placing these basking areas in the goldfish pond and away from the banks will keep raccoons, coyotes and other goldfish pond predators from making a meal of them.

Build an enclosure to keep any wandering red ear sliders or other pond turtles from escaping. This wandering behavior occurs more often when they are looking for a mate. If these pond turtles escape they might become prey for a predator or find local water ways to invade. In fact, many aquatic turtles are illegal in certain states, like the red eared slider in Florida because they interbreed with other aquatic turtle species. They are also banned on the entire continent of Australia and owners can face jail time and a huge fine. Always check to make sure you are buying legal turtles and are legal where you live.

Floating Island for Turtles and plants

Share & Like, Please & Thanks
| Home | How to Take Care of a Goldfish | Water Turtles in Goldfish Ponds

Scroll back to top
We use cookies to ensure that we give you the best experience on our website. If you continue to use this site we will assume that you are happy with it.Ok