The Exotic also called the Exotic Shorthair, is a relative of the Persian and has a similarly laid-back temperament. It is a lap cat with an affectionate and gentle personality. The Exotic will follow its owner around and then jump into their lap as soon as they sit down. The Exotic also has American Shorthair ancestry, so it is more active and playful than the Persian. The Exotic gets along well with both other pets and with children.

How much attention does an Exotic need?

While the Exotic doesn’t need as much grooming as the Persian, it still has a thick coat that needs brushing. It’s especially important to brush the Exotic in the spring and summer, for they molt in warm weather, and the loose hair can easily form mats if not brushed out.

Does an Exotic have specific dietary needs?

Like all cats, Exotics are obligate carnivores that get their nutrition from proteins and carbohydrates. Unlike omnivores such as humans, they cannot fully metabolize carbohydrates – which don’t do anything for them except make them fat. The amount of food an Exotic should be given will depend on the cat’s age, size, activity level, and whether or not it has been fixed. Exotics should be fed twice a day, and they usually like to take a few bites at a time. 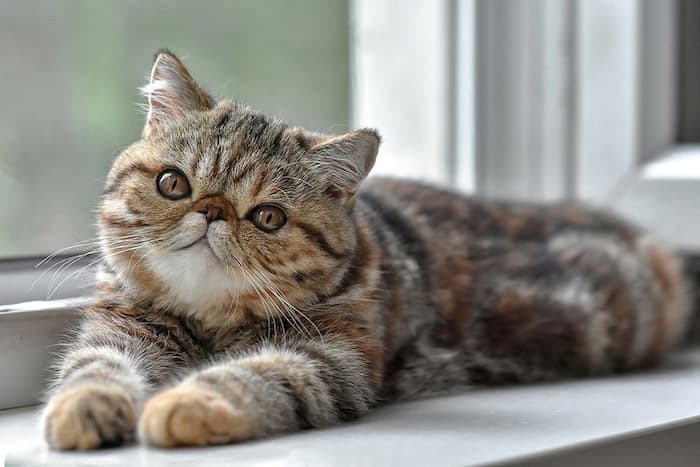 Exotics are often bred to have the same flat face and brachycephalic head as many Persians. They thus have the same health problems caused by that flat face, including various eye and teeth problems. They are also prone to eating and breathing problems. Exotics also often develop into a hereditary disease called Polycystic Kidney Disease. Fortunately, there is a simple genetic test that can detect it.