The Oscar is a fish species from the cichlid family usually known by a variety of names like the marble cichlid, velvet cichlid, and tiger Oscar. These species have there are mostly found in tropical South America, where they naturally reside. 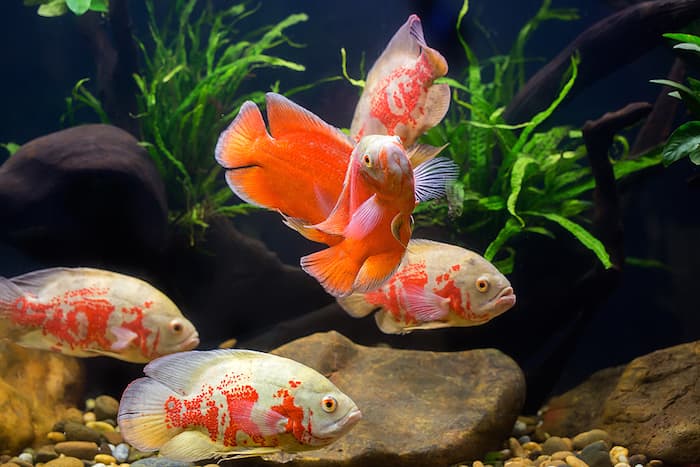 Different Types of Oscar Fish and their Appearance

This species was first discovered in the year 1831. Oscar fish’s origin is claimed to be from the Amazon River basin, Rio Negro, Paraguay, and the Parana River. They were then introduced in other parts of the world, including Australia, China, and the US.

In the US, they are commonly found in the state of Florida, largely due to the pleasant climate. In its native South America, these fish are considered very essential for commercial fisheries as their taste is greatly appreciated.

These fish species have been considered to be very intelligent. The moment they get used to their new setting and feel comfortable in the aquarium, they begin getting curious.

You will begin noticing their swimming patterns as they will get close to the wall of the tank and float there, observing what you are doing. You will realize that these fish have a character of their own. Their beautiful color and personality make them one of the most popular freshwater fish around.

Here are the types of Oscar Fish you are likely to find in local stores and breeders: 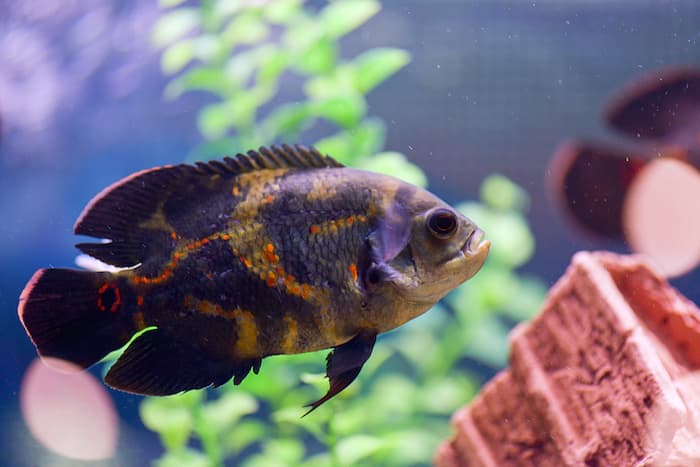 The Tiger Oscar is one of the most popular types of fish around. The only way you can distinguish it from other types is through the patterns on its skin, which resemble that of a tiger. This pattern is normally found close to its tail, but sometimes it may cover the entire body.

Most of their body is of the color black, accompanied by some bright reddish and orange pattern. Some tend to have dark bands towards the end of their body. Their colorful combination makes them appear like a lava rock swimming on the tank, making it a beautiful scene. The Tiger Oscar can grow up to fifteen inches. 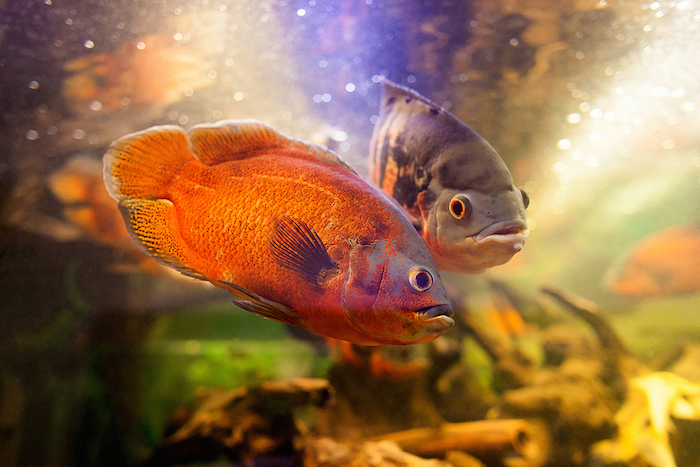 This is another type of Oscar fish that is popular. Its unique features can be identified by its two-colored appearance. They have a beautiful coloring mix of fiery red and red. The two colors combine smoothly around their back, and their transition is simply incredible.

Their fins are mostly black, and just like Tiger Oscar, they have an orange rim around their eyes, which also protrudes above their head. The Red Oscars can grow up to fifteen inches. 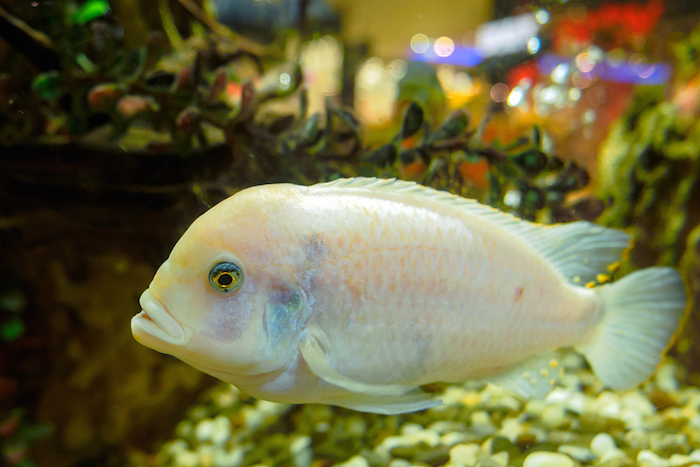 Albino is the last of the parental types of Oscar Fish. The Albino Oscars are white and have an incredible pattern. They also have a closely intertwined red/orange lattice, which is normally found at the edges of their body. The complexity and density of their patterns vary from one fish to the other. This makes each of them unique, thus making it an exciting species. If an Albino Oscar has mixed colors, its value improves since it looks more beautiful. This notion is, however, subjective since these fish are known for their beauty.

Now lets on to the crossbred variations;

Veil Tail Oscar is one of the most beautiful crossbreds of the Oscar fish. Veil Tail Oscars separate themselves from the rest through their long and almost transparent threadlike tail. Though their coloration may sometimes vary, the majority of them are reddish/orange and black.

Their tail is usually covered with easily distinguishable bright orange spots that can reach as far up as their head. You can also see fish that has orange lines that run across their body. The moment they expand their tail, it simply becomes one of the most beautiful features that make this fish special.

The Wild Oscar can grow to be larger than the other breeds of the Oscar fish. They have a base color of tan to gray with varying bright orange, yellow, white, gray, and tan markings on their fins and body. They also have a black Ocellus spot at the beginning of their caudal fin, commonly bordered with tan, gray, yellow, and orange. This attractive coloration makes them be a beautiful species liked by people.

This fish is popularly known for its beauty. It has a color variant that makes the beautiful scenery of your fish tank. They can grow up to sixteen inches. They can also live for about eight to twelve years. Their color patterns include a system of channels that are connected and filled with other beautiful.

The Size and Lifespan of Oscar Fish

So, how big can the Oscars get? They can grow for up to about one foot. It will take an Oscar fish about a year to grow to its full size. It usually grows an inch every thirty days.

Oscars can actually live for a long time. Their lifespan is about twenty years. The key factor that ensures the fish lives for this long is proper care. You have to make sure that the tank conditions are favorable and that its tank mates are friendly to live with. The kind of food you give it will also play a major role in its lifespan.

Food and diet for Oscar Fish

These fish are native to subtropical and tropical South America. Wild Oscars are known to consume meaty foods, mostly of other small fish and live insects. Live insects and live fish make up about ninety percent of their diet. They are also known to eat snails, shrimps, nuts, and fruits though this is seasonal.

The diet of Oscars maintained in aquariums is a little different from that of their wild counterparts. Mainly, aquarium Oscars are mostly fed with live feeder fishes and pellets made for large aquarium fish. People also provide them with foods like wafers, flakes, crisps, tablets, and pellets. They usually swallow pellets and tablets as a whole without gumming up. For wafers, you can split them into thirds and then give them to the Oscar. These tablets, wafers, and crisps are ideal when the fish is young.

Since the Oscar fish are native to the Amazon basin’s warm waters, ensure that the aquarium is at approximately 25 degrees. You should see to it that it remains between 23.5 and 27 degrees at all times. Just see to it that the temperate conditions of the aquarium are stable.

The best size for an Aquarium for Oscars should be one that has a capacity of 75 gallons of water and more. This is because Oscars can grow to about 45 cm; hence the aquarium should be large enough to accommodate them.

You can do with a fifty-five-gallon aquarium, but it has the limitation of not allowing you to add more fish. You should know that one fish is never enough. If the aquarium is too small in that your fish become overcrowded, they will become unhealthy and distressed.

You should know that it is easier to maintain a healthier environment in a larger water body since any changes will have less impact. Tanks of small sizes may require a lot of effort from your end in keeping the conditions ideal for the Oscars.

Since Oscars grow big, you need to be careful keeping them with other fish since space may become limited and they may not too well. While choosing a tankmate for your Oscars, consider the following;

Given those requirements, some of the best fish that will be ideal tankmates for Oscar fish include the blue Acara, convict cichlids, Firemouth cichlids, Silver Dollar fish, and catfish. This said, though, you should not put them in the same tanks with some large cichlids, for instance, the terrors and Texas cichlid, as they will probably fight over food while in the tank. 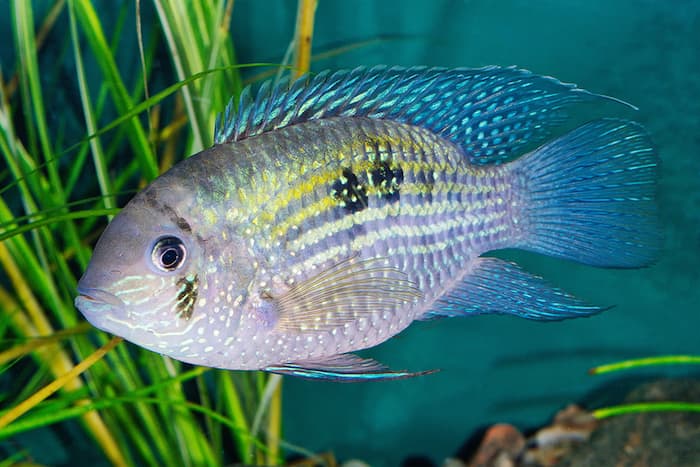 Several types of diseases affect the Oscar fish, and they are easy to recognize. They include:

The exact cause of this disease has not yet been determined. However, it is majorly associated with the flagellate parasite Hexamita. Mineral and vitamin imbalances, improper nutrition, poor water quality, and overcrowding are likely to cause this disease.

This disease’s symptoms include reduced appetite, some white sores on top of the head and around the eyes, holes on the head with mucus trailing from then, etc.

Maintaining a healthy water condition by keeping low fish density and regular water changes can prevent this disease. Oscar fish suffering from this condition can be taken care of and treated using a drug known as Flagyl (metronidazole.)

This is a common disease among many aquarium fish, including the Oscars. The cause of it is a protozoan parasite known as ichthyophthirius multifiliis. This parasite causes an itching effect on the fish, leaving it uneasy and uncomfortable.

Oscar fish suffering from this condition will have a sudden loss of appetite, have increased gill movements, be found sitting on the bottom of the tank for most of their time, and have white spots on their skin.

Oscar fish suffering from this condition can be taken care of by using salt, copper sulfate, and Formaldehyde. You can also increase the temperature of the water, especially when treating your Oscar fish.

This condition is also referred to as Columnaris disease. Just like the hole in the head condition, the major cause of it is fish stressed under poor environmental conditions. Fish with this condition will have a reduced appetite.

Portions of its fish may fall apart, maybe observed to spend most of its time on the surface, and may have blackened, bloody or tattered fins. This condition can be treated using antibiotics such as Oxytetracycline, Tetracycline, and Chloramphenicol.

In conclusion, owning Oscar fish is an exciting adventure. You will continuously be amused by their curiosity and beauty. Knowing how to take care of them and maintaining an ideal condition for them in the tank will go a long way in lengthening their lifespan.

Sujit Modak is the owner of the fishkeeping blog Aquarium Tales. He is an experienced aquarist. He successfully experimented with a complex ecosystem inside aquariums. Biotope aquariums and aquaponics are the fields of his interest. He shared his experience-based thoughts on – How to Care for Oscar Fish in Aquariums.