Goldfish Out of Water

How long can a goldfish live out of water?

You wake up in the morning or come home after work to see that one of your goldfish jumped out of the water and onto the floor. Don’t assume this is end of that goldfish. A goldfish can live up to an hour out of water and significantly longer depending on a few variables. If the goldfish in question jumps out onto a nonabsorbent surface like a tile or wood floor, it took some of the goldfish tank water with it and the room temperature is cool, it can live several hours possibly up to 3 hours or more. 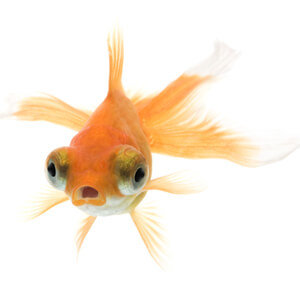 Is It Dead or Alive

You can decide if your goldfish is too far gone that its chances of survival is next to none. If there is a chance you can immediately begin a reviving treatment; otherwise the almost dead goldfish can be euthanized using clove oil. Clove oil is known to be the most humane way to kill a goldfish. Here are some signs to look for.

Signs Your Goldfish is Dead

How to Revive it

Proper goldfish care: The steps to reviving a goldfish that jumped out of its tank. Immediately place the goldfish out of water into cool water from its tank. Cool water contains more oxygen. Gentle rinse off any dirt and debris that might be sticking to the skin of the goldfish. Carefully pry open the gill covers; if the gills still appear red, this is a good sign. Place the goldfish upright next to an air bubbler or where there is good water circulation. Maximize aeration in the goldfish tank by doing a partial water change. Some owners with expensive show goldfish will place their fish into a bag half full of water and pure oxygen and also might inject it with dexamethasone which encourages revival of the senses. If you are successful in your attempt, add a stress coat treatment

| Home | How to Take Care of a Goldfish | What to Do: Goldfish Out of Water

23 thoughts on “What to Do: Goldfish Out of Water”