Having a well balanced diet is essential for the health of any living being, including goldfish. That being said, it’s not imperative that goldfish owners buy a wide variety of goldfish food — but it certainly doesn’t hurt. There are numerous types of goldfish food on the market today; different goldfish food provides different health benefits and some are even designed specifically for one type of goldfish. 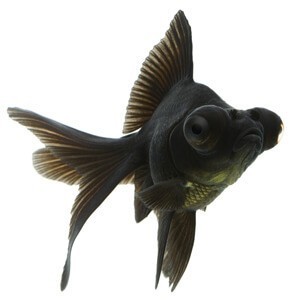 Freeze dried, frozen or live goldfish food that contains creatures like bloodworms, krill, brine shrimp or squid help add protein to a goldfishes diet. These types of goldfish food contain essential vitamins and minerals that help balance the diet of a goldfish and help reduce stress. Krill contains carotene that creates red pigments in goldfish, which helps prevent goldfish from losing their color. Squid is a marine species but can provide valuable amino acids and cholesterol that are suitable for young goldfish and fry. Frozen carrots also contain carotene and like other goldfish greens and aquatic plants, also help with the digestive tract of goldfish.

Frozen and freeze dried goldfish food come in individual servings or in brick form. In the brick form, it is relatively easy to tear off chunks or mash it up for feeding to small goldfish. Most will retain all the nutrients if they are processed correctly and don’t let the creatures’ bodies to burst. Cheap version may lose nutrients when their juices leak during thawing in the aquarium water. 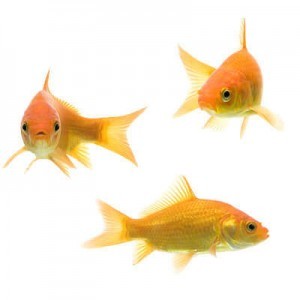 Add Greens to the Diet

Goldfish are mainly herbivores and so they love to eat aquatic plants, green algae, vegetables, fruits, and leafy greens. Greens help with a goldfishes digestion and green peas are commonly advised as a treatment for goldfish constipation.

Two aquatic plants that goldfish eat are anacharis and duckweed. Anacharis is inexpensive and grows fast. Consider buying a few bunches of these and place a few in the goldfish aquarium and place the others in a waiting tank where they can continue to grow. Rotate these aquatic plants in and out of the goldfish aquarium when your goldfish eat them down. If it all works out, you will have a constant supply of green food for your goldfish. Duckweed is a small floating plant that spreads fast in a well lit tank but goldfish tend to eat it faster than it can grow. You can try the same process with the duckweed as you would with the anacharis.

Fruits and vegetables can be fed to goldfish but need to be softened before they are fed to them. Do this by either boiling or freezing them. The fruits and vegetables don’t need to be cut into small pieces that are smaller than the mouth of the goldfish; they will nibble on them like they do the aquatic plants. Fruits tend to be more messy than vegetables so they are not recommended unless you plan to do a water change soon. If after 12 hours the goldfish have not finished eating them, remove the left overs before they dirty the water by breaking apart into the water.

Fruits and Vegetables that Goldfish Eat

Just one of many reason to keep a little bit of green algae in your goldfish tank is that it’s a favorite food of the goldfish. Goldfish will constantly snack on green algae and at the same time, do a pretty good job of keeping it under control.

Scroll back to top
We use cookies to ensure that we give you the best experience on our website. If you continue to use this site we will assume that you are happy with it.Ok