Skip to content
How to Treat a Cut on a HamsterScratches, cuts and bleeding are commonplace among pet hamsters. A cut or scratch can occur in any variety of ways including: rubbing or bumping up against sharp or rough objects in the cage, rubbing against the bars of the cage, falls from an elevated level to a lower one, bedding that is too rough or bites and scratches from another hamster in the cage. Visible bleeding can also be a result of any number of illnesses such as a burst cyst (pus will also likely be present) or excessive scratching of the skin due to parasitic mange. 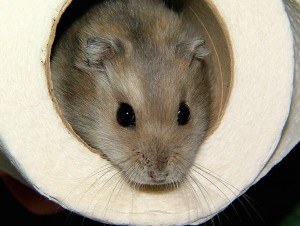 Do You Need to Intervene?

Bleeding is not always a given in regards to scratches and abrasions but it is likely in regards to any cuts. Minor cuts will likely stop bleeding on their own and won’t need any treatment. A hamster with a minor cut will probably lick the wound as it clots and may continue to lick the wound as it heals. If a cut doesn’t stop bleeding after a few minutes, you will need to provide first aid. Larger wounds with steady blood flow will require immediate attention and possibly vet care.

How to Stop Bleeding and Treat a Wound

If a wound continues to bleed after a several minutes you should use a cloth or tissue to help stop the blood flow. You can do this by holding the tissue up against the opening of the cut for several minutes. It’s important to be gentle though so you don’t make the issue worse. If your hamster won’t sit still and fights you over treatment, you might try one of the following treatments:

*An alternative to traditional antiseptics is thyme tea. It is safe for hamsters and used to treat a number of issues including disinfecting cuts and scrapes.** UMF Manuka Honey is a go to among hamster owners since it is completely safe. It also helps keep the wound from scabbing over. Scabs in general itch and a hamster with a scab will likely chew on it if it is in within reach. A wound with a scab can be torn open it gets rubbed against an object in the hamster’s cage. Scabs on the nose are particularly vulnerable since the nose is usually moist all the time.

If a cut is deep and won’t stop bleeding, you will need to go to the vet to get your hamster stitches and probably antibiotics to help treat or avoid an infection.

7 thoughts on “How to Treat a Cut on a Hamster”