How Do You Take Care of Newborn Kittens? 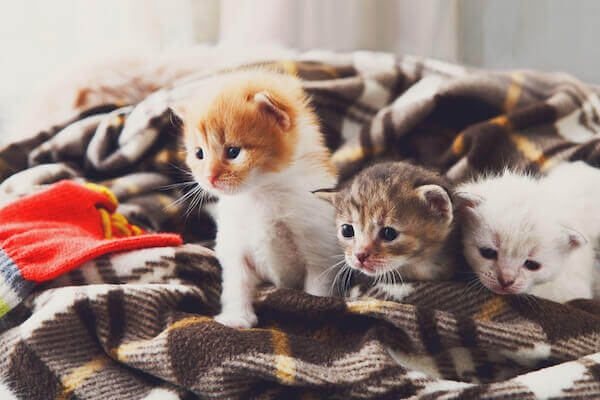 Caring for Newborn Kittens When the Mother Is Present

Follow the mother cat’s lead; if she doesn’t want you near her babies, stay away. Most mother cats know how to rear their own young, especially if they have had previous litters. Just keep a discreet eye on the family for potential problems. 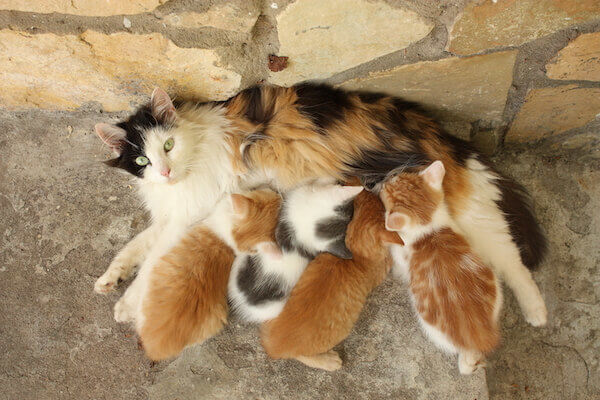 Do and Do Not

Don’t handle the kittens during their first week unless absolutely necessary. Handling them will upset the mother and may even cause her to reject them.

Do start handling them from the second week on, so the kittens get used to being around humans.

Do get the kittens their first vaccines when they are around six weeks old. While they are nursing, they will be protected from infection by the antibodies in their mother’s milk. After they start eating solid food, however, they will lose that protection.

Caring for an Abandoned or Orphaned Litter of Foster Kittens

Keeping the kittens warm is even more important than feeding them; newborn kittens die more quickly from hypothermia than they do from starvation. Keep the kittens in a quiet and warm room. Put them in a box big enough to accommodate the whole litter with room to grow. Line the box with towels. Use a heating pad or hot water bottle wrapped in a towel to keep the kittens warm.

How to Feed Baby Kittens

Kittens under four weeks old cannot eat solid food; they need kitten milk replacement formula. For the first 24 hours, mix the formula with Pedialyte electrolyte solution to help the kittens transition from their mother’s milk to the formula and to reduce their chances of developing diarrhea. A newborn kitten will need about .11 ounces of formula per day. You will have to bottle-feed the kittens until they are three or four weeks old; after that, they will start drinking from a saucer.

Never give a kitten cow’s milk, for they can’t properly digest it.

When the kittens are six weeks old, start giving them dry kitten food and reducing the amount of formula. They should be completely off the formula by the time they are twelve weeks old. Feed the kittens four times a day. 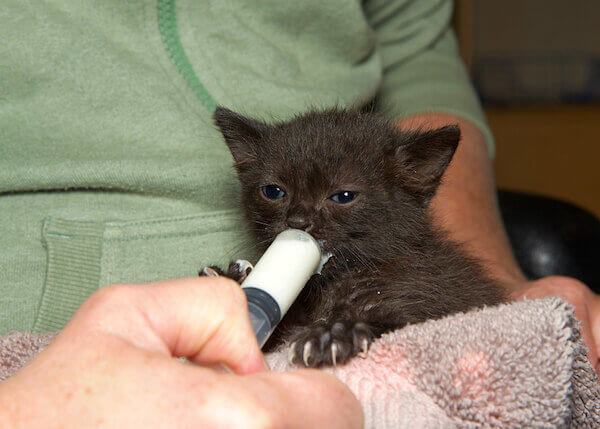 Should You Hold or Pet a Young Orphaned Kitten?

Yes. Kittens do need to be socialized and acclimated to living with humans.

Similarly, you should expose the kitten to other people, car rides, cat carriers, and other common things and events it will have to live with as it gets older. A kitten that misses out on such experiences will grow into a fearful or aggressive cat. 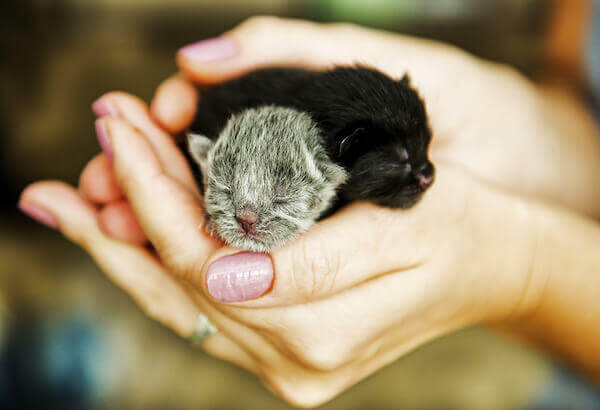 When litter training kittens, just put a kitten in a litter box right after it has eaten. Give the kitten a few minutes to do its business and put it back with its littermates after it has finished. Then put the next kitten in the box, and continue down the line until everybody has had a turn.

A key part of litter training kittens is accessibility; the kitten needs to be able to get in the litter box in order to use it. The litter box should, therefore, have low walls and be somewhere the kitten can easily reach.

You will also need to clean the litter box at least once a day. Cats of any age won’t use a dirty litter box. 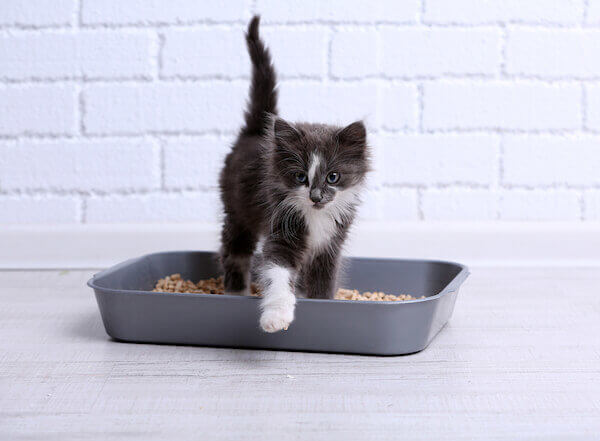 How to Tell If a Young Kitty Is Sick or in Need of a Vet?

Weigh the kittens every day and record their weights. Healthy kittens should gain a ¼ to a ½ ounce every day. If they aren’t putting on weight quickly enough, it’s time to call the vet.

The runt of the litter should always be checked out by a vet, for they are smaller and weaker than their littermates. They are thus more likely to develop a condition called Fading Kitten Syndrome that often ends in the kitten’s death.

If a kitten isn’t going to the bathroom after being stimulated or put in the litter box, call a vet. It could be constipated or have a blockage. 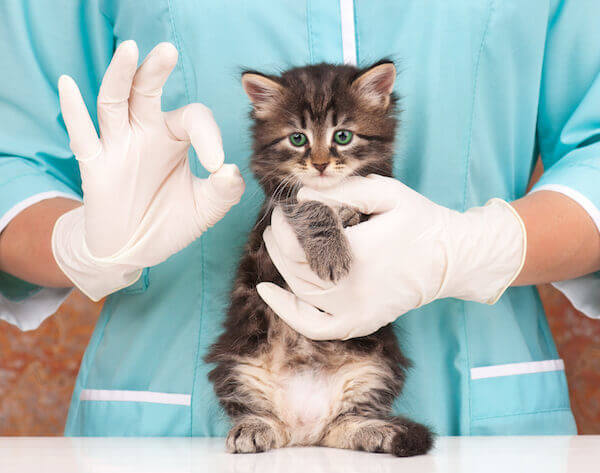 A kitten’s normal body temperature is between 100 and 102.5 degrees. Anything below 99 degrees or above 103 degrees should be reported to a veterinarian.

Abnormal stool and urine colors also indicate illness. A white stool, for example, means the kitten has a potentially lethal bacterial infection in the bowel. A kitten’s urine should be light yellow; dark yellow indicates dehydration.

Other signs that a kitten needs to be seen by the vet include the following:

How to Put Kittens up for Adoption?

The ideal time to start placing kittens up for adoption is when they are 12 or 13 weeks old. By that age, they will be fully weaned. They will also have learned all of the social and behavioral skills that they need to know from their mother and littermates.

To keep the kittens healthy and make them more attractive to potential adopters, get them the shots that kittens their age need. A 12-week old kitten should get its first feline leukemia vaccine along with booster shots for calcivirus, panleukopenia, and rhinotracheitis. Your vet will advise you as to when you should get the kittens their first rabies vaccine.

Similarly, people are more likely to adopt kittens that have already been spayed or neutered. A vet may neuter or spay a kitten that is anywhere between eight weeks and five months old – preferably before the kitten reaches puberty and goes into heat or starts spraying. Your vet will recommend the best time for getting your kittens fixed.

When adopting out kittens, start by simply asking people you know if they are interested. You want to give the kittens to people you can trust to give them good homes. After exhausting the list of trustworthy relatives, friends, and coworkers, it’s time get help. Ask your vet or local animal shelter for their recommendations. Some shelters and vets will even help you find homes for your kittens.

Animal shelters always interview prospective adopters, and you should do the same thing if you are considering giving the kitten(s) to somebody you don’t know. Ideally, the adopter should be somebody who has had pets before.

Some experts recommend charging an adoption fee between $20 and $60. Such a fee will weed out people who aren’t truly committed to raising a kitten or kittens. 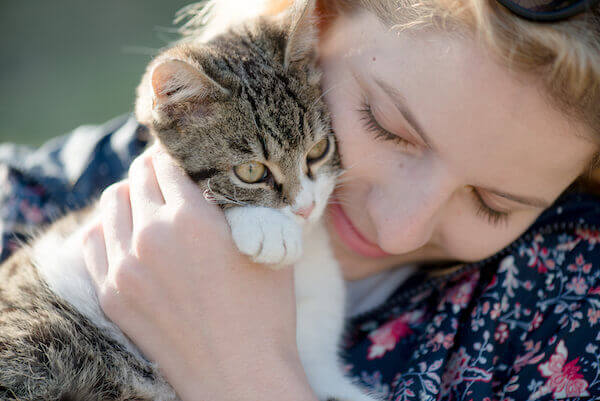