The Savannah is an active and lively cat that hates to be left alone. It is not a lap cat, however; instead, it will give headbutts to favored humans or follow them around the house. Savannahs are playful and enjoy games like fetch. They also like playing in the water and can be leash-trained and are often described as having dog-like personalities. 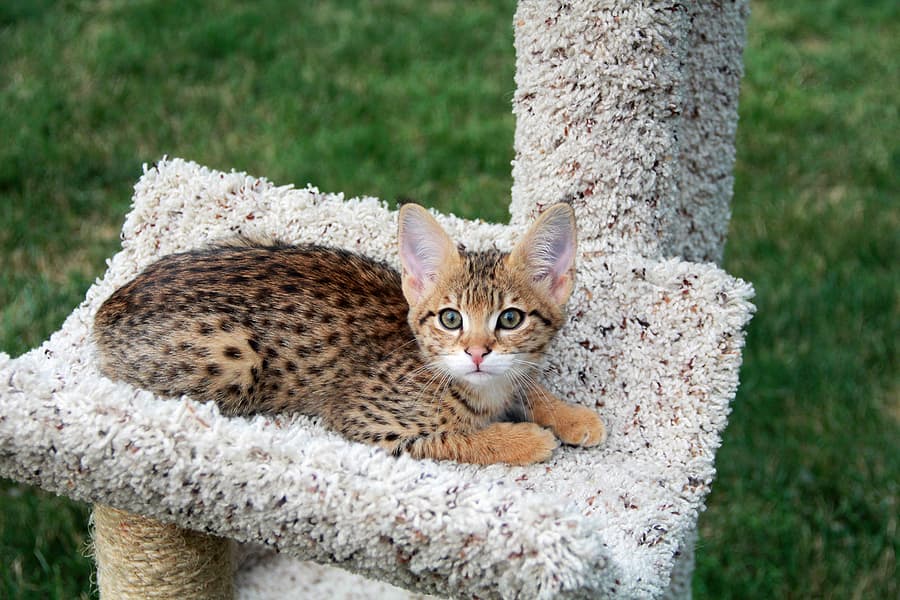 Savannah cats are hybrid cats that are linked to the exotic pet trade. The popularity of these cats puts a demand on breeders to obtain serval cats, which can mean, taking wild cats out of their natural habitat. You can learn more about this from International Cat Care.

Savannah cats may or not be legal in your area. For example, the state of Massachusetts only allows Savannah cats that have documentation stating they are F4 (16% Serval) generations past the original mating pair. That is at the point that they are recognized as being domestic cats.

How Much Does a Savanah Cat Cost?

They can range from $1,000 to $20,000 depending on the percent of Serval cat they are. They are expensive because they are difficult to breed and the cost associated with maintaining the health of a wild animal. Experts warn would-be buyers to be careful about buying Savannah cats at a discount because it could be a scam.

How Large Do Savannah Cats Get?

F1 generation cats (57% Serval) are about 2.5 times the size of the typical domestic cat. They can be as tall as 17″ and weigh up to 25lbs. As the percentage of Serval decreases from each generation, they don’t get as big but are still often larger than most domestic cats. Additionally, males tend to be larger than females.

How Much Attention Does a Savannah Need?

As a short-haired cat, the Savannah doesn’t need much in the way of grooming; it just needs to be combed once or twice a week with a metal comb that will remove loose hair. Since Savannahs are active cats that love to climb, they should be given sturdy perches and cat trees. They are also smart enough to learn tricks and respond best to a clicker and reward-based training. Savannah cats also enjoy toys; since they like to chew, the toys need to be tough enough to withstand abuse.

Does a Savannah have specific dietary needs?

Savannah cats need more taurine in their diet than do other cats and will thus need taurine supplements. Taurine is an amino acid found only in meat, and taurine deficiency can cause serious problems like tooth decay, heart disease, and blindness. Some authorities recommend that a Savannah be fed raw meat that is at least 32 percent protein. Savannahs get fed twice a day, and they can be given both dry and wet food.

Veterinarians have found that Savannah cats have proportionately smaller livers than other cats their size. Therefore, if the cat needs surgery, the vet should not use the anesthetic ketamine which is metabolized through the liver and can therefore cause complications.

| Home | How to Take Care of a Kitten | Are Savannah Cats Good Pets?