Skip to content
Hatching and raising ducklings is not an endeavor for the faint of heart. Waterfowl are messy and loud, and many things need to be considered before making the attempt. There is no fool-proof way to guarantee success, but a little extra knowledge can go a long way in the triumphs and occasional heartache of the journey. 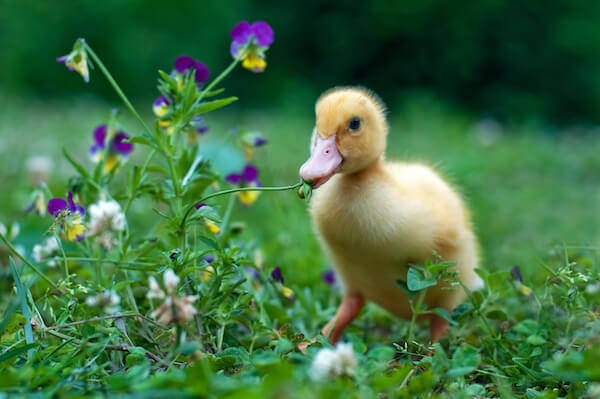 Caring for Eggs and Hatchlings When a Momma Duck is Present

The first thing you will notice when a mother hen is ready to lay a clutch of eggs is that she will begin nesting in a particular spot, whether it be in a nesting box or somewhere else, and will become quite aggressive when approached and refuse to move. It is very important that the nest and brooding mother not be disturbed unnecessarily by curious children or pets. Depending on the specific breed of duck, a hen can lay one egg per day and can end up with a clutch of about a dozen eggs.

These eggs can take anywhere from 25 to 29 days to hatch, with some certain breeds taking as long as 35 days.

In a lot of cases, the mother duck instinctively knows what to do in regards to her eggs and new hatchlings, but sometimes a caregiver will have to step in for instances where a mother duck is scared off from her nest by a predator or even killed, or if she simply gives up after a short time and is considered a “bad momma”. Mother ducks will wander off from the nest and eggs from time to time to eat, swim, or stretch her wings, but this is perfectly normal behavior and should not cause alarm.

It is very important NOT to disturb the eggs or this could potentially cause the mother to abandon the nest.

A hatchling can swim at a week old, and this oil is to help protect them from becoming waterlogged and drowning. It is also a good idea to put out some starter crumble in a flat bowl and some fresh, clean water next to it for both mom and hatchlings.

Whether in the wild or in captivity, there are times when a mother duck will abandon her nest for a variety of reasons. In this case, a caregiver can step in and, as long as the eggs are still warm, there’s still a chance they can be hatched. 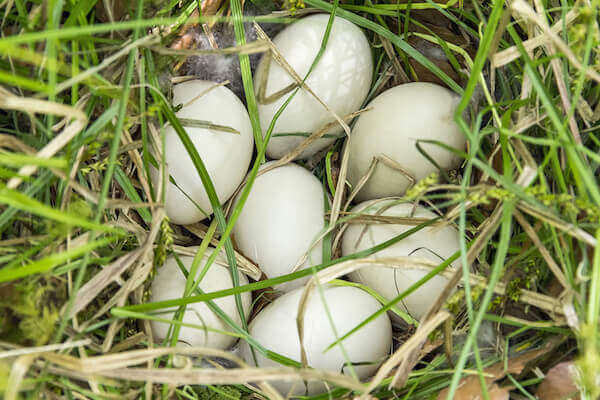 How to Care for Ducklings

Once the ducklings are born and no longer wet, they will need to be moved to a brooder with a heat lamp set at 90° F.

Keep the lamp positioned in such a way that the ducklings are able to choose where they are comfortable. If they are huddled close together, they are too cold, and if they are spread out and panting, they are too hot. The heat can be decreased by approximately one degree per day until they are feathered out and ready to venture outside. 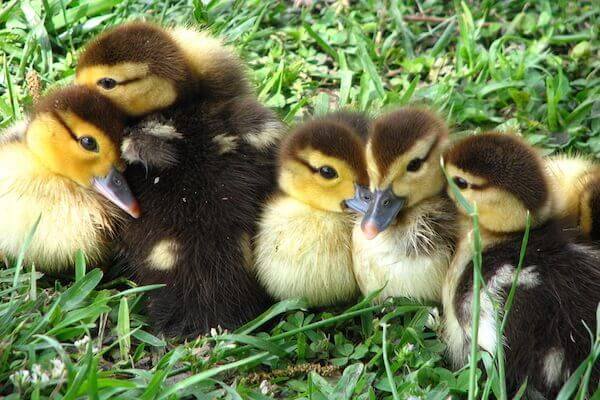 Ducklings can swim as early as a week after hatching, but they do not produce their own feather oil until about a month old. Swimming should be closely supervised in this early stage in a small child’s pool or anything the ducklings can easily get out of to prevent exhaustion and drowning. A duck’s natural habitat is grassy wetland, and they will enjoy spending much of their time splashing about in the water.

Other things to consider are that ducks are social creatures and will not do well when left completely alone. It’s best to have at least one other duck to provide company; two females if you do not plan to breed, and one drake per every few females.

Can You Release Hand Raised Ducks into the Wild?

A debate that can ‘ruffle some feathers, ducks have been released into parks and local ponds with seemingly no ill effects, however, take into consideration that a hand raised duck has become used to being fed and taken care of by their caregivers and could be quite lost if turned loose into the wild on their own. Being handled on a daily basis would cause them to lose any fear they might have of potential predators and would most likely not survive. Many abandoned animals, including ducks, have been successfully released into the wild over the years, but they have not been raised as pets as often is the case with ducks. 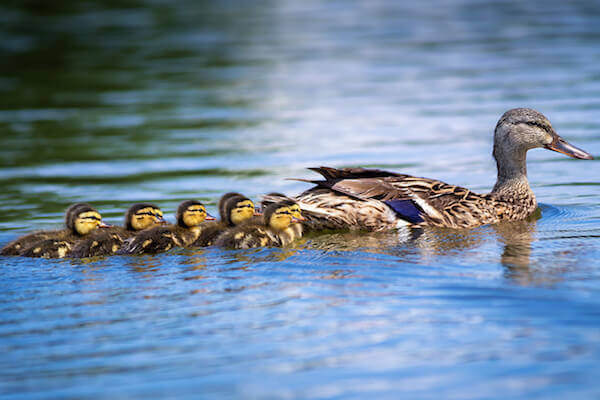 Ducklings imprint once hatching and bond closely with their clutch mates or human caregivers. Keep this in mind if considering releasing them, and also check with local officials to make sure releasing them is not, in fact illegal, as is the case in some states. They may be ruled under ‘abandonment of a domestic pet’.

If you do intend to release them, choose an area where the water is slow-moving and there are plenty of tall grasses for shelter. If releasing into a park, pick a time early in the day when it is not very busy, preferably with other ducks present. It is a good idea to check periodically to be sure the ducks have integrated well and are able to feed and take care of themselves. Not all breeds of ducks can fly and will not migrate South in the wintertime. This will be a time when food is scarce and the duck may not survive. If released into a park, the ducks will most likely be fed by locals—although bread is not good for a duck’s diet, however, visitors are a lot less present during the colder months.

In cases where you have found abandoned eggs in the wild and are planning to release them upon reaching maturity, the best choice would be to contact local conservationists that will have the knowledge needed to properly release the ducks successfully. If raising domesticated ducks, it is probably best to keep them domesticated and safe.

| Home | How to Take Care of a Pet Duck | How Do You Care for Duck Eggs and Hatchlings?

4 thoughts on “How Do You Care for Duck Eggs and Hatchlings?”