Should You Choose a Dutch Rabbit as a Pet?

There are over 60 different breeds of rabbits that exist, therefore each type can vary greatly in appearance and size. The Dutch rabbit is extremely common in the United States and it is often brown and white or black and white. It is one of the most common breeds of rabbit that are kept as household pets worldwide.

The Dutch rabbit, as you can probably tell by its name, originated in Holland, where it was originally dubbed the Hollander rabbit. It lived in the area around the 1850s and traveled to England around 1864, where it quickly rose in popularity. The British exported the breed to various points all over the world.Dutch rabbits that reside indoors and that are well cared for can live anywhere from 5 to 15 years. If the animal is spayed or neutered, they can actually be expected to live even longer. They are usually born in litters of 6 after a gestation period of 33 days. They can be weaned from their mothers after 4 to 6 weeks. 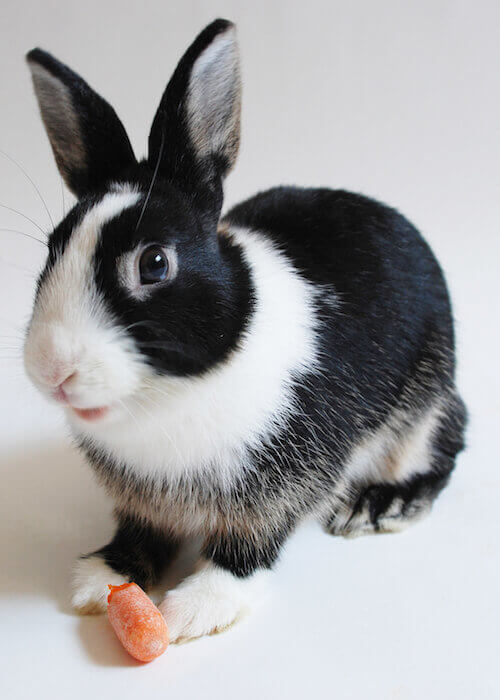 The Dutch rabbit is considered to be a “fancy” rabbit due to the beautiful markings on its coat. They are always white with an additional base color, usually black, brown, or gray. These markings cause the Dutch rabbit to be extraordinarily striking in appearance, and the “formal” aura that they give off is often compared to the tuxedo cat, since they, too, appear to be wearing a suit.The breed is particularly small when compared to other breeds of rabbit. As a matter of fact, the average Dutch rabbit weighs in at 4 to 5.5 lbs. However, it has powerful hind legs that are longer than its front legs and ears that stand erect when necessary. These features help the rabbit to appear larger when in the presence of enemies.

Not unlike cats, Dutch rabbits are nocturnal, meaning that they sleep all day and are most active at night. This can be a problem sometimes because they need a lot of attention and can become bored quite easily. They are also jumpy and cautious by nature, so it is important that you try not to spook them.Dutch rabbits are also energetic little creatures that bond easily with their owners. They typically show their happiness by running around and jumping. They can be extremely attentive, often cuddling, sitting on the laps of loved ones, and even answering to their names, not unlike cats and dogs. They are easily trained due to their inherent intelligence. They can even be persuaded to use litter boxes!As long as your Dutch rabbit has had prior human contact and has been adequately socialized, it should feel comfortable with both children and adults. However, children under the age of ten may require supervision when it comes to handling a Dutch rabbit.It is also paramount that all Dutch rabbit owners know the proper way to pick up and hold their pet. Its body is extremely delicate, and it can be unintentionally injured if it is not handled with the utmost care. Rabbits have an innate fear of being picked up, and often fight back, using their giant hind feet to attempt a bounding escape. However, if the rabbit is restrained, kicking in this manner can inadvertently cause fractures of the lumbar vertebrae, which could result in paralysis. 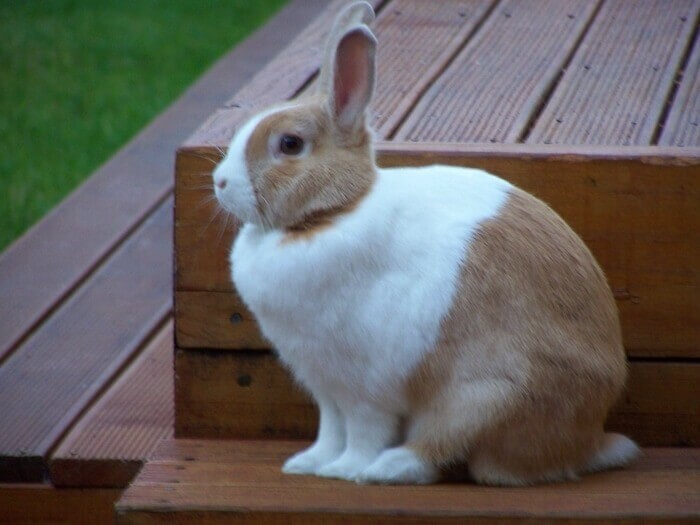 To prevent this tragedy, simply support the rear end of the rabbit when you pick it up. You can grab the large fold of skin that is positioned over its shoulders with one hand while grabbing its hind legs with the other.Because it is a Dutch rabbit’s natural instinct to flee when scared, it may even accidentally injure a person trying pick it up. Though this is almost never intentional, the rear claws can be quite sharp and its back feet are very strong, resulting in a powerful, though misguided, defense mechanism. If you keep your rabbit’s nails trimmed and pick it up properly, this should not be a problem.Sometimes, your Dutch rabbit may attempt to bite you, though it will not intend to hurt you. Its bite is more along the lines of a pinch, however, a provoked rabbit may deliver a serious bite if it is not left alone.

It is important that your Dutch rabbit is fed a sufficient diet of fresh greens and quality hay in addition to the store-bought rabbit pellets veterinarians recommend. The rabbit needs this roughage to digest its food properly and to stay healthy. If you are unsure about what to feed your Dutch rabbit, try to emulate what a rabbit would eat in the wild by instinct.Also, be sure to provide fresh water and let the rabbit exercise frequently. And, remember, Dutch rabbits do not require regular grooming as a rule.Dutch rabbits are suited to both indoor and outdoor living, though they are decidedly safest indoors, if at all possible. Rabbits easily adapt to houses and apartments as free-roaming pets. 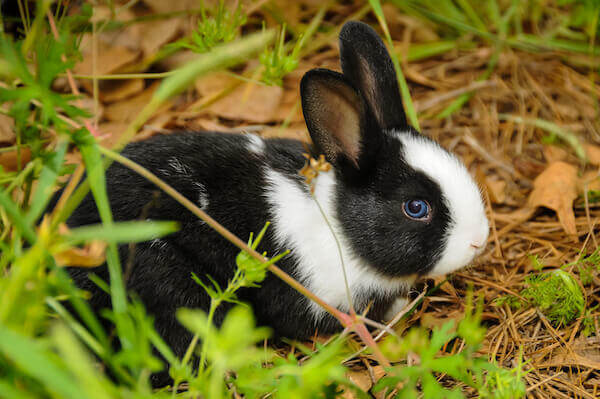 However, if your rabbit must be outside, be sure that its cage or hutch provides it with plenty of room to run around. Any cage or hutch should also be situated at least 3 feet off the ground to keep your rabbit safe from predators, such as dogs, cats, and foxes. It should be noted that captive Dutch rabbits can die from the anxiety caused by an attempted attack, even if the predator does not have actual access to it.The hutch or cage should also be situated in a shady area for the rabbit’s comfort during warm seasons, and be sufficiently shielded from wind, snow, rain, and all other inclement weather.Your Dutch rabbit does not require vaccination, though a routine visit to the veterinarian will keep it healthy and decrease the likelihood of devastating disease due to preventive medicine. Plus, rabbits love chewing on anything that they can find, so the best thing that you can do to prevent emergencies is to provide your pet with plenty of toys to nibble on, and keep electrical cords, knickknacks, and ornaments out of its reach at all times.

| Home | How to Take Care of a Rabbit | Should You Choose a Dutch Rabbit as a Pet?