It should be no surprise that as your dog ages, its food requirements will shift. Ensuring that you are always providing your dog with food suitable for them and to puppy proof your home is essential for their health. It may require you to alter their diet multiple times throughout their lifetime.

It is easy to get overwhelmed when choosing dog food because many of them appear to be the same, and there are so many to choose from. To choose the best food for your dog, you must take into account not only its breed, but also the types of food. 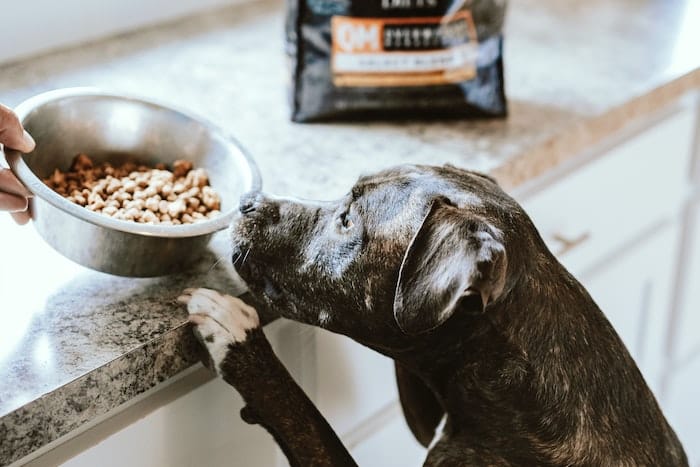 Most brands of dog food boast that they will improve your dog’s coat, digestion, and vitality. Some of these assertions, however, are grounded in science, while others are based on conjecture or the simple fact that dogs seem to enjoy a certain diet.

Most commonly encountered diets and food varieties are as follows:

Many of the food groups described here can be found in dry kibble, the most common form of dog food. Dry food, as the name implies, is food that has very low water content. It can be meat-based, grain-free, produced for little dogs, large dogs, etc.

Dry dog food has many advantages, including its long shelf life, which can lead to long-term savings, and the fact that your dog’s dental health will improve as a result of the chewing.

While it may be less of an issue for dogs than cats, the low water content and the possibility of it being less tasty than other options are drawbacks.

Wet dog food (or canned food) is composed of protein, fat and carbohydrates just like dry food, albeit generally lower in carbs. The gravy or broth it adds is nutrient-rich and serves as the main source of moisture. Although the nutritional value of wet food is generally comparable to that of dry food, it does have some advantages.

Most people would agree that wet food is much more enticing than dry food. If your pet is eating less than normal, utilizing wet food is typically an easy fix. In addition, it can aid in keeping your dog hydrated due to its high water content. This reduces stress on the digestive system, which may alleviate stomach problems.

In contrast to dry food, the long-term cost of wet food is typically much higher. Moreover, the food won’t keep for long once it’s been opened, so get the right size can for your pet’s weight and store any extras in the fridge, tightly covered. 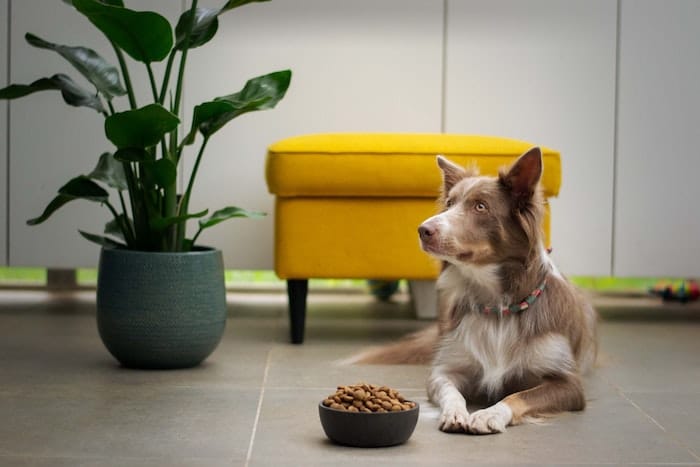 No cereal grains like rice, oats, or corn are included in grain-free dog food. While largely protein based, it’s not exclusively made up of protein, as carbohydrates are still a crucial part of any dog’s nutrition. Grains are often substituted with starches like potatoes or other vegetables.

Dogs with grain allergies should eat this food. You can also benefit from this if you find that the dog’s digestion is being negatively affected by the excessive consumption of grains, which are sometimes used as fillers with low nutritional value. The skin and coat may be healthier on a grain-free diet, and allergies may be less of a problem.

There are, however, drawbacks to a grain-free diet. Before everything else, know what kinds of carbohydrate substitutes are being used, as they may also be harmful to your pet. Second, grain-free diets have been met with much controversy because of the association between these diets and canine dilated cardiomyopathy.

It’s best to check with your vet before making any major dietary changes, including switching to or from a grain-free diet, for your dog while the evidence for or against this connection is still unclear.

The raw food diet consists of foods that have not been cooked in any way. Food can be purchased fresh from a grocery store, or it can be purchased dehydrated or frozen from a variety of dog food manufacturers. In addition to the commercially prepared dog food, there are a variety of raw-ingredient-based supplements and additions available.

This trend began in the 1990s and is based on the belief that dogs should be fed a diet similar to that which they would have consumed before they were domesticated.

Some of the benefits cited by advocates of a raw food diet, such as a healthier coat and teeth, are common to almost every dietary approach. However, many veterinarians disagree with this approach, and there is a lot of controversy surrounding this diet because its claims haven’t been backed by solid research.

There are two main worries people have about switching to a raw food diet. One is the possibility of an unhealthy diet, as most owners will make their own food. The other is the FDA’s concern over the potential for both dogs and humans to be exposed to raw meat bacteria. 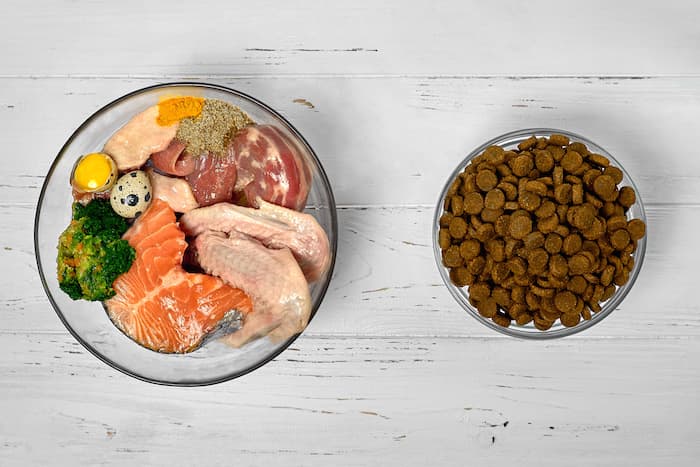 Unlike cats, who are real carnivores, dogs’ diet and digestive traits qualify them more as omnivores. This opens up the possibility of eating a variety of foods, including vegetables, to help them. They have a high protein requirement, as well as a need for other nutrients typically found in animal meat, but this is similar to the requirements of cats.

Because of this, advocating plant-based diets for canines is a contentious issue. Some vets say that vegetarian or vegan diets can be healthy for some dogs, but only if they’re specifically tailored to the needs of the animal.

In addition, veterinarians who suggest vegetarian or vegan diets for dogs typically do so when the dog has an immediate need for the diet due to allergies, intolerances, obesity, or other conditions that prevent it from eating meat protein.

So, while your dog may occasionally enjoy some vegetables, anyone considering switching their dog to a vegan diet should first speak with a canine nutritional expert who can help them develop a balanced plan.