Do They Have Ears and Can They Hear?

Even though the ear of a goldfish is more complex they do not have the same hearing range as a human. A goldfish can hear 40 to 3,200 Hz and a healthy human can hear 20 to 20,000 Hz. Many goldfish can pick up on the vibrations or music or even the footsteps of a passerby. Tapping on the glass of a goldfish aquarium can be harmful to the health of a goldfish. A goldfish can become stressed out or even die if the vibrations from the tapping are severe enough. Vibrations that enter a goldfish aquarium can bounce off the other sides of the tank, confusing the goldfish. For that reason, goldfish in an aquarium is more sensitive to sound than those in a large pond or stream. 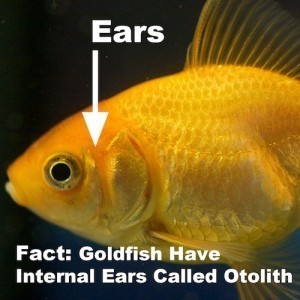 Can It Smell Through its Nose? 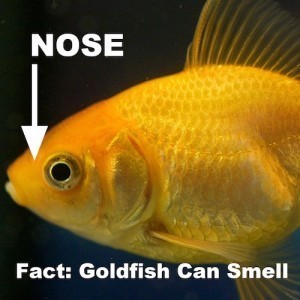 Do Goldfish Scales Grow Back after Injury or Disease?

If a scale is lost due to an illness or injury, it will quickly grow back much like how a fingernail grows back but it will lack these rings.

More about the Scales

A goldfish’s scales are created in the dermis and are bony plates that overlap like the shingles on a roof. As a goldfish grows, its scales grow with it. When the water is warm in the summer months the goldfish grows fast and when the water is cold in the winter months, the goldfish grows slowly. Under the microscope, the goldfish scales of a mature goldfish will have several growth rings. In the summer they grow spread out and in the winter they grow tightly close together. By counting the spread out and tightly compacted groups of rings, one can get the age of a goldfish. 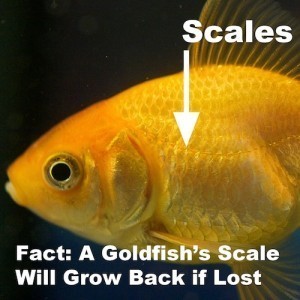 Beneath a protective slime coat is the outermost layer of a goldfish called the epidermis. The slime coat layer is produced by the epidermis to help cut down surface tension for mobility in the water and it also acts as a protective barrier to fend off fungus, bacteria, and parasites like Ich. The epidermis is a very thin delicate layer of living skin tissue that covers the scales. The outer layer of skin is so thin that extra precaution should be taken whenever a goldfish is handled; a dry net or hand can easily tear it.

Below the epidermis is the dermis. The dermis is the layer of skin that contains cells that produce the color of a goldfish. There are two types of cells that create color. The first is called chromatophores which produce ‘true’ color patterns from their pigment granules. They are named based on the color that is created by the pigment granules. Expansion and contraction of these pigment granules dictate what color the goldfish is. It’s common for goldfish to be one color and eventually transform into another color. Several factors that can lead to a color change in a goldfish include water temperature, the age of the goldfish, the health, or its diet.

The other type of cells in the dermis is called iridocytes. Iridocytes are cells that act as reflective mirrors and give the goldfish its metallic finish. Silvery guanine in the cells is responsible for their reflective nature. Unlike the chromatophores, the silvery guanine in iridocytes does not expand and contract. It’s the combination of these cells that are responsible for every color and pattern a goldfish might display. These include the metallic, self-colored goldfish with one solid color; a metallic variegated color of two or more colors; and calico colors that are created by three different scale patterns. The three types include the metallic scales that have guanine present; nacreous scales that contain some guanine; and the matt scale type that has no guanine present in the dermis.

What are the Goldfish Body Parts Called? 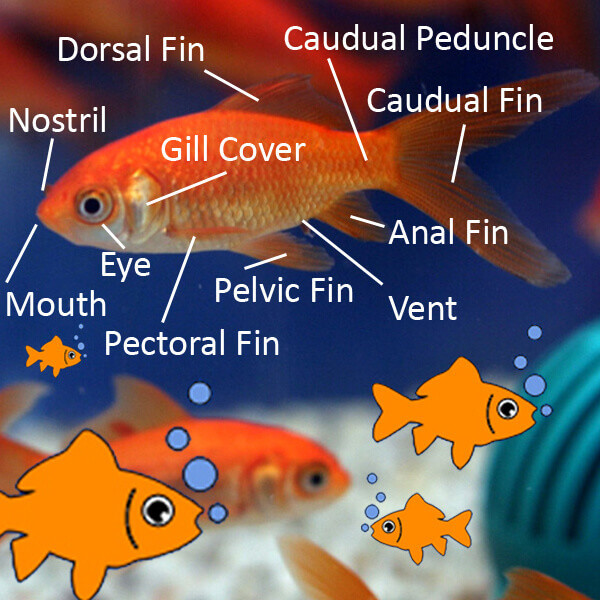 
How Good is a Goldfish’s Eyesight? 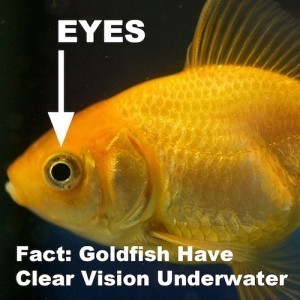 How Do They Breathe Through Their Gills?

A goldfish does need to breathe oxygen but instead of using lungs like mammals, they use a pair of gills. Goldfish gills work much like a pair of lungs but instead use the dissolved oxygen in their water. Since a goldfish lives its entire life in water, it uses osmosis These gills are located right behind the head and eyes on both sides of the goldfish’s body and covered by the operculum, commonly called gill covers. The process of breathing for a goldfish starts when it draws in oxygenated water through its open mouth and closes its throat and operculum.

The goldfish then shuts its mouth and opens its operculum forcing oxygenated water out through the gills. Before the oxygen in the water can enter the goldfish’s bloodstream, it must pass over important parts of the gills. The oxygenated water will first get filtered when it hits the gill rakers. The gill rakers catch free-floating food particles and other waste materials. They act much like the hairs inside your nose do to filter out dust and debris.

After the gill rakers, the water passes through the gill arches and then over the gill filaments. The gill filaments contain two rows of a series of thin membranes called lamellae. The filaments that contain the disc-like lamellae are set up to create a large surface area in a small space. This allows for a maximum amount of gasses to be exchanged; up to 85% of all the oxygen in the water is taken in when it passes over the gills.

Oxygenated water that passes over the lamellae permeates into the goldfish’s bloodstream through the tiny capillaries in the lamellae. This is a similar process that occurs in the lungs of mammals when oxygen gets absorbed through the capillaries in the alveoli that are set up to have a large surface area in a small space. At these capillaries, clean oxygen enters the goldfish’s bloodstream while the byproduct, (deoxygenated) carbon dioxide exits and is forced out into the water through the gill covers. 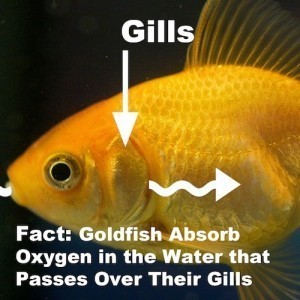 What is a Swim Bladder For? 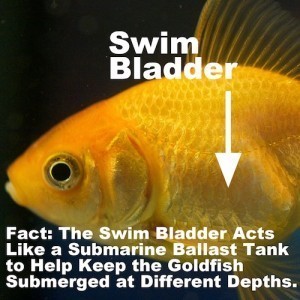 Function of a Swim Bladder

Goldfish, like most fish species, are cold-blooded. Unlike a warm-blooded animal that uses homeostasis to keep its internal body temperature constant, the body temperature of a cold-blooded goldfish is regulated by external environmental factors. When a cold-blooded amphibian-like a pond turtle is cold, it will seek out a nice place to sunbathe to warm its body temperature. Goldfish don’t have the luxury of getting out of the cold water to warm themselves up; instead, a goldfish simply slows down.

This is most noticeable In a goldfish pond during winter when the water temperature drops to 50*F (10*C) or below. Goldfish become less active, sit at the bottom of the goldfish pond, and eat very little. At 40*F (5*C) goldfish go into a semi-hibernation and don’t eat at all. There is little they can do to raise their internal body temperature other than sitting at the bottom where the water temperature is slightly warmer or seek out any pond heaters to sit next to. The main difference between being cold-blooded or warm-blooded is that warm-blooded animals use a lot of their intake of calories to warm their bodies while cold-blooded animals don’t have to.

Back to Top
photo credits: Andrew