Skip to content
Can they bite a finger or toe off?
There are no recorded cases of it but do you really want to find out the hard way? They are called ‘snapping’ turtles for a reason. It’s not the force of the bite that you need to worry about, it’s also the sharp beak like mouth that’s meant for cutting. To answer the question, with those two factors considered, it’s possible a snapping turtle could sever human fingers or toes.

The common snapping turtle, scientifically known as the chelydra serpentina species, can weigh up to 75 pounds and grow to be 18 inches in length. The exception to this is snapping turtles that are kept in captivity that are commonly overfed, causing them to often become overweight. In the wild, they rarely exceed 35 pounds. They have a hard shell covering both their back and stomach that protects them in the wild. Their tail, which is close to the length of their top shell, is covered in spiny sharp ridges. They have no teeth but possess a bony beak for a mouth that is particularly strong. 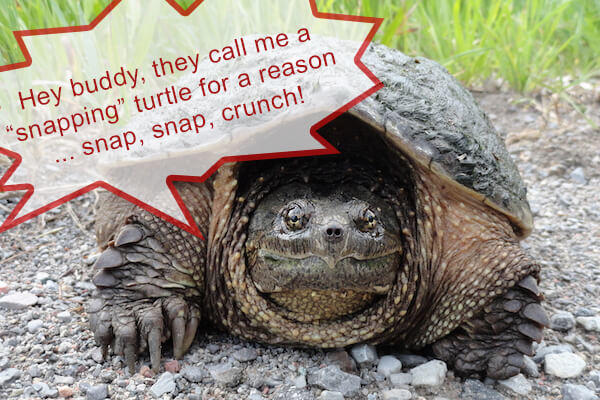 In addition to a strong beak, they have sharp claws that they can use to fight off predators in the wild. Due to their many defense mechanisms snapping turtles are prey to a short list of animals but are the predator to several animals found in the wild.

Related Reading:
Turtles as a PetHow to Identify the TypeTaking Animals from NatureTurtle Health Issues

Where Do Snapping Turtles live?

Snapping turtles are the largest freshwater turtles that can be found in North America. However, smaller and more aggressive turtles can be found in areas from Canada to South America. These animals commonly live in ponds, streams and even brackish environments like estuaries. Snapping turtles enjoy floating at the water’s surface, basking on logs in the sunlight and burrowing into muddy areas found in shallow waters.

How Powerful Can They Bite?

In comparison, Crocodiles with the strongest bite have a force of 16,460 newton, and humans have a bite force of around 890.

But remember, snapping turtles have a sharp beak like mouth that can cut. They don’t need to crush their prey when they can cut it in half. 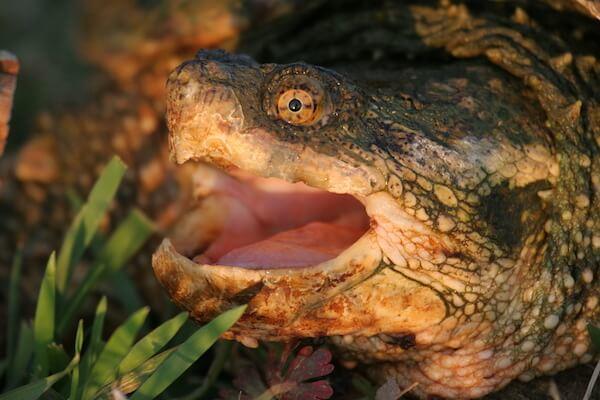 Some people use nets when capturing turtles, not realizing that the turtles can become ensnared in the net. This can this cause a threat to the turtle as well as the person handling it when the time comes to cut the netting away.

If you enter the water where snapping turtles are present, be careful not to place your feet or hands in the muck where they like to hang out. Normally they would try to flee but if they feel threatened, as in you stepped on them, they will bite. If signs are posted noting their presence, it’s best to heed the warning and stay out of the water.

People have been fascinated by reptiles from the beginning of our existence. While some reptiles are relatively safe to keep as pets, it is a bad plan to hold others in the captivity of your home. When snapping turtles are kept as pets, they frequently grow to weigh over 60 pounds. The sheer size of the creatures makes it difficult to handle them.

Snapping turtles are known to be highly aggressive animals. It is important to remember that when left in their natural habitat these animals are mighty hunters to many animals such as frogs, insects, worms, snakes, frogs, fish, smaller turtles, birds, small mammals, and crayfish. It is only natural for them to use their bite and strength to “hunt” for food, even when they are kept in captivity. If you are considering keeping a snapping turtle as a pet you should keep the force of their bite in the forefront of their mind. There are a plethora of videos on the internet depicting the damage that these animals can cause. Considering that they are capable of biting through the thick shell of another turtle, it is easy to draw the conclusion that they can easily penetrate both the skin and muscle of humans.

When considering a turtle as a pet several people across the globe opt for a smaller, less aggressive breed. There are several very good reasons for this. Aside from the nasty bite that snapping turtles can deliver, it is necessary to consider the size that snapping turtles can grow to. Once a turtle surpasses eight inches in length it is recommended that they are kept in a 55-gallon tank at the very least. As these animals grow it becomes more and more difficult to keep them contained in a large enough enclosure. This is the cause of many snapping turtles that have been held in captivity being released back into the wild as they approach adulthood.

Now that you know a little more about snapping turtles, you may want to consider commissioning custom pet portraits of your amazing and fearsome turtle!  If you’re a fan of custom art and want to commemorate your unique pet, contact your favorite custom artist today. They would love to work with you to create a one-of-a-kind piece of art that captures your turtle’s personality and beauty.

1 thought on “Can a Snapping Turtle Bite Your Toe or Finger Off?”