French Bulldogs are one of the most charming and cutest dog breeds out there,

But it does not end there!

There’s another thing that makes them even more charming and adorable, that is their brindle coat.

There are some pretty interesting facts about these unique coats that you need to know before you get one for yourself.

Apart from that, I’ll also cover the health, grooming needs, exercise, and almost everything you need to know about the Brindle French Bulldogs. 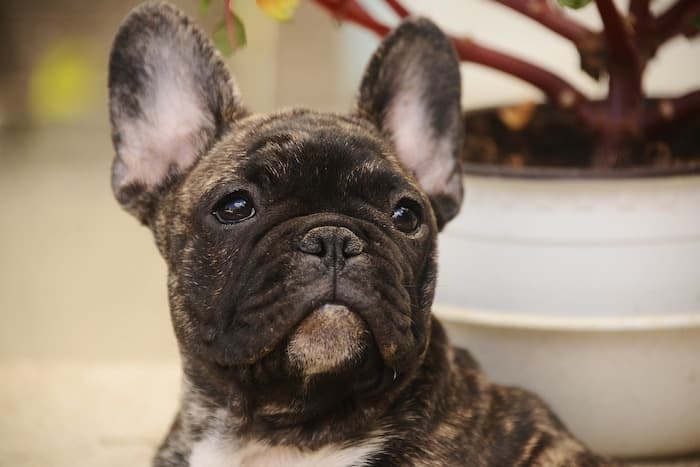 What Is a Brindle French Bulldog?

While the French Bulldogs come in a variety of colors, the most striking ones are the ones with that special brindle coat.

Brindle French bulldog has this dazzling pattern compared to a regular Frenchie.

This brindle pattern is known for its darkness. The twisting stripe pattern of colors is so much darker than the typical base color of their coat, with a bit of a blend of lighter hair throughout the coat.

Many refer to it as the ‘tiger-striped.’

Based on its color light or the dark stripes, The Frenchie looks distinct from its typical counterparts. 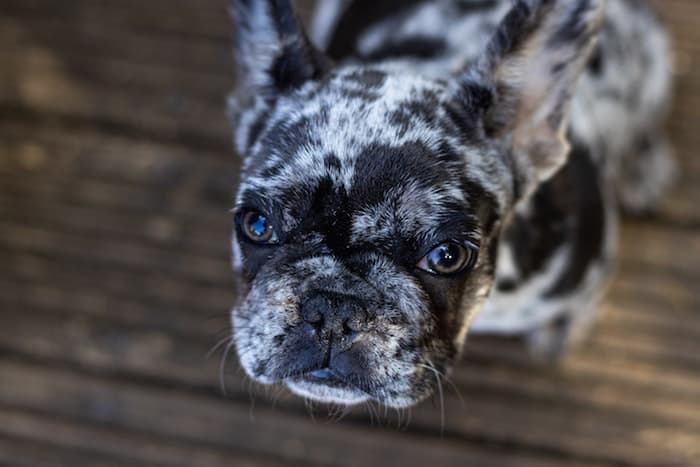 However, the most common are the ones with darker and lighter colors, but there are other colors too with different features and mainly patterns.

This is the common coat color, with a darker coat with a mixture of lighter hair.

The seal brindle is mostly comparable to a typical Brindle with a few white hairs; it mostly looks similar to a pure black french bulldog.

These Blue Frenchies have a greyish-blue coat with a subtle brindle pattern. Most of the time, the coat looks grey, though.

Tiger Brindle Frenchies has a Dark coat with some fine white hairs in it and looks identical to a tiger’s stripe.

Chocolate brindle, as the name suggests, has a chocolate brown color with a slight mixture of a milky color; they have blue eyes while the nose and nails are brown.

Reverse Brindles have white or cream color coats along with dark patches or even stripes. This one is considered to be much rarer than the others.

Pied Brindles are almost similar to the reverse brindles when it comes to the coat colors; the difference comes from the dark patches. In this case, it’s much less than on a reverse brindle, and most pied brindles have a patch around their eye.

These are all the colors that you can expect in a brindle french bulldog.

Where Does The Brindle Color Come From?

The brindled pattern comes from the genes, specifically the K-Locus gene, which is responsible for the fawn, dominant black, brindle colors.

If the Frenchie needs to have a Brindled pattern, both its parents should have a recessive K gene.

However, not every brindle pattern is the same; each one is different from one other; some may have the brindled patterns all over them while the other will have the pattern on specific areas. 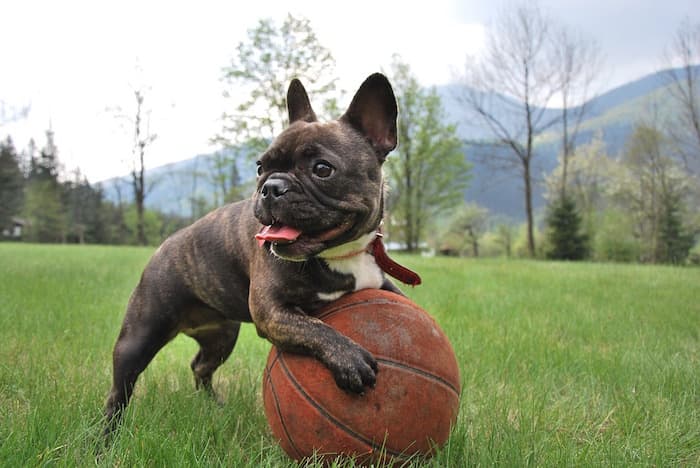 Here is everything that you need to know before you invest in a Brindle French Bulldog.

You might know that the French bulldogs are small-sized dogs, they only stand 11-13 inches tall, and both males and females weigh 28 pounds (12kg) on average.

When it comes to grooming a Frenchie, it is one of the easiest dog breeds to do so mainly because of its short fine hair.

If you want your Frenchies coat to look the part, you will have to bathe him 4to5 times every year, brush them with a stripping comb outside, and grooming mitt regularly.

If you’re concerned about shedding, forget it!!

One of the best things about the French Bulldogs is they don’t shed often.

French Bulldogs are very social dogs and will get along with people, children, and even other pets very quickly.

They’re also considered as an intelligent dog breed and lovable companions out there.

Frenchies are considered to be stubborn and challenging to train, so you may have to train them earlier. Nowadays online programs like Doggy Dan dog training helps to train any dogs at home.

Brindle French Bulldogs are prone to gaining unhealthy weight, so exercising an hour every day is crucial; also, keep in mind that these breeds are prone to obstructive airway syndrome, so avoid exercising in warmer climates, because it might lead to difficulty breathing.

Also, avoid spending much time in the hot sun; this might cause skin burns.

A good meal is essential to a Brindle Frenchie mainly because it keeps their coat in perfect shape.

Meals that include ingredients like Water, Carbohydrates, Vitamins, Minerals, Meat Fat, Oat, and Oils are great for this pooch.

While serving water, make sure it’s clean, basically freshwater. Also, if the franchise is still a puppy, they might eat more than their adults, so avoid overfeeding them.

Brindle French Bulldogs are not short of complicated health problems, and not just one or two; there is a long list of potential health problems that can affect a Frenchie.

There are 3 common issues that you are likely to encounter while raising a Frenchie:
That’s not all; these are the other common symptoms:

A Brindle Frenchie is expected to live around 10-14 years. However, the chances of getting to these numbers might be slim due to their health problems. An average of 9 years is most common.

These dogs are not swimmers; due to their large chests, the French Bulldogs can’t swim, so avoid leaving them anywhere near water.

This dog breed is not the cheapest by any means and is also one of the expensive ones; expect to pay around $2000-$4000; they can also be relatively cheaper at around $1500 or even much higher at $8000 depending on the breed.

These types of prices are largely due to the difficulties in breeding this Dog because of their small body. It’s difficult for these breeds to have a natural birth; because of this, the pups are delivered through C-Section.

Where Can I Find A Brindle French Bulldog?

If you’re ready to purchase a Brindle French Bulldog, the best place to look is the AKC marketplace, simply because the breeders should follow AKC guidelines and the puppies are 100% AKC registered.

Or else the most common way is to look for a reputable breeder; looking for one at a shelter or rescue would also help.

Even though there’s a lot to consider before buying a Brindle French Bulldog, there is no doubt that the breed will be a perfect loving canine companion for you and your family; due to their low maintenance and friendliness, this breed will be a joy for you to have in the coming years.