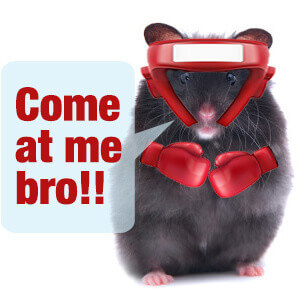 You can observe your hamsters communicating and interacting with one another by the way they use their body language to display an emotion. As a pet hamster owner, it’s important to observe these interactions to know when all is well in the cage or when you might need to mediate a conflict. The following list below includes a few of these hamster behaviors that are often harmless but can sometimes escalate into something serious like a fight.

When two hamsters approach each other head to head, they will stick their noses up to each others muzzles ( from the nose to the ears) and say “hello, who are you”. They will be able to tell who the other is by smelling their scent gland that’s located in that area of the their face. Once they identity is determined, several things can then occur. 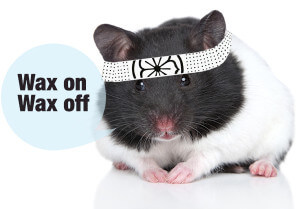 Circling is another way for two hamsters to find out who each other is. One hamster will push it’s head up under the other hamster’s belly in an attempt to smell its scent glands (Dwarf hamsters have this type of scent gland), then other will take its turn to smell the other. At times this hamster behavior can look a bit aggressive if an over eager hamster is involved. Sometimes in this situation, it can escalate into wrestling.

Encounters can escalate into a wrestling match when one more aggressive hamster tries to bite the underbelly of the other. The subordinate hamster will raise up, open its mouth, puff up its cheeks and extend it’s arms out in an attempt to push the aggressive hamster back. If the subordinate hamster doesn’t want any trouble, it might hold out its paw, flick its tail and not make eye contact with the other hamster. This behavior is called appeasement and can be described as a surrender.However, if one hamster doesn’t initially back down, a wrestling match can break out. It begins when one hamster sands up on its hind legs and lunges at the other trying to bite its underbelly. In turn the two hamsters begin to roll around trying to get the upper hand. If one of the hamsters accepts defeat, it will give up by lying on its back and freeze in this position. When this happens, the wrestling match is usually over but sometimes, neither hamster wants to give up so easily. This is when the wrestling can escalate into fighting. 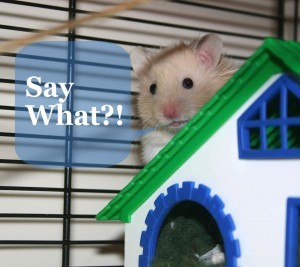 A hamster fight looks much like a wrestling match but takes on a more physical and aggressive tone. Biting can become much more serious and can lead to serious injuries. There will also be more noticeable squeaking. Eventually a hamster will give up and flee from the fight. Often the fight ends when the loosing hamster runs away through a hamster tunnel and hides in another compartment of the habitat. If you don’t have a hamster cage that is large enough for the loosing hamster to run and hide

in, the winning hamster can continue to the fighting by chasing after it.If it comes to this, it’s probably best to separate the two by putting one hamster into a temporary “time out”. This can be done by distracting the two fighting hamsters by squirting them with water to break it up; then by catching one of them in a cup or by using gloves and then placing it into a separate living space. Eventually you will be able to put the hamster that’s in time out back into the main cage but if the same two continue to fight, a permanent separation might be in order.

Syrian hamsters should never be housed together because they are by nature solitary. If you house two Syrians together, they will eventually fight. It’s only okay to house them together when they are babies still nursing or when you plan on mating them. In regards to dwarf hamster breeds, for the most part you can keep these little guys in small communities. You can best avoid fighting if you provide a large enough cage for all the hamsters to stake out their own little space or for a fleeing hamster to run and hide from any aggessive hamsters. That’s just good hamster care but it’s especially important if you have hamsters that tend to fight.

81 thoughts on “When Hamsters Fight”