Although they may not look as cuddly as cats or dogs, bearded dragons are one of the best companions a reptile lover can ever ask for. Because despite how fearsome their name is, bearded dragons only got it because of the flap of skin underneath their chin. When threatened, that excess skin will open up to appear bigger and scare off predators.

But other than that, what makes bearded dragons the perfect pet for reptile lovers is how friendly they are. Even those new at handling cold-blooded pets will find the experience fun, maybe even therapeutic. However, just because they’re ‘easy to take care of’ doesn’t mean you can go in blind. Like other pet companions, bearded dragons require appropriate care from their owners. Otherwise, you’re risking their safety under your ownership. 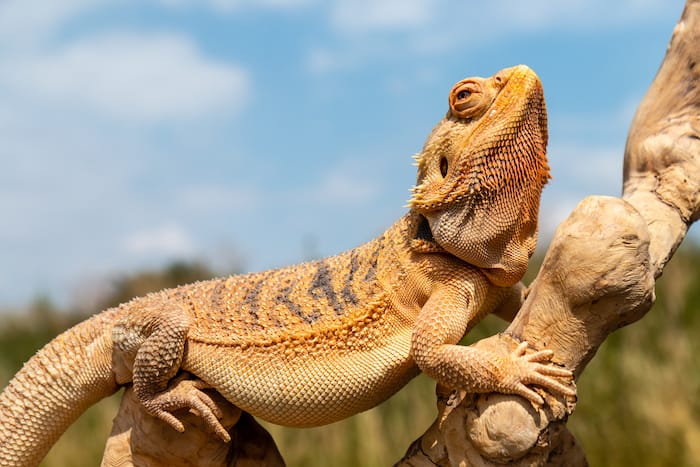 How To Care For A Bearded Dragon

Here are some things you must learn as a bearded dragon owner:

As loyal and affectionate as dogs are, even their needs must be met, or their relationship with their owner will be strained. Considering bearded dragons fall under the exotic pets category, their behavior and needs might come off as surprising or unique, especially when you compare them to warm-blooded animals. Hence, before you purchase the first bearded dragon you see, know what you’re signing up for.

Even though they’re prickly on the outside, bearded dragons are omnivores. If provided with the essentials, they should last around four to 12 years. During that time, you’re bound to warm up to each other and see their personality shine through.

Although bearded dragons are exotic pets, it’s pretty easy to find the right food for them. Since they’re omnivores, their diet consists of small critters, bugs, and vegetables. Hence, even garden peas will be excellent food if you’re thinking of spoiling your beardie a bit. However, feeding them too much of the same thing could ruin their diet. Regardless of age, remember that the right proportions for their feed are 30% vegetables, while the rest consists of small insects and worms.

Bearded dragons’ well-being primarily relies on their living conditions. They’re semi-arboreal creatures, which means they prefer dwelling in trees rather than burrowing in the sand like other lizards. You must give them something to perch on off the ground, especially in the area they frequently inhabit. Ideally, this can be a sturdy rock pile, moderate-sized branches, or half logs. You must also give them hollow logs to hide into.

Aside from what you’re supposed to put inside, consider the tank itself. Don’t repurpose an empty aquarium to house a bearded dragon. Because they’re extremely sensitive to temperature, having all sides of the enclosure transparent will harbor high levels of humidity inside. And once the temperature drops, transparent walls will do nothing, regardless of whether your heating system’s running at full power.

Instead, give them a terrarium with only one side of the enclosure transparent. That way, it has enough visibility to see what your beardie is doing while ensuring there’s regulated heat inside. 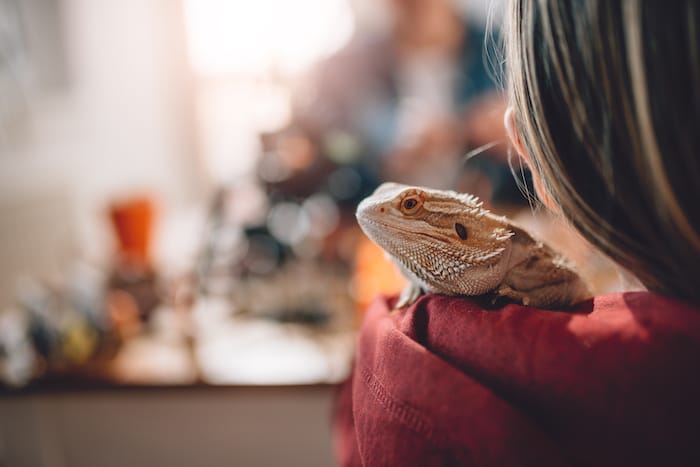 Since reptiles aren’t built to regulate their body temperature, you must know how valuable heat is for bearded dragons’ environment. Some pet owners believe that having the terrarium face the sunlight is the best solution due to its energy efficiency. However, being unable to control the sunlight’s intensity might end up cooking your bearded dragon alive.

Add a heat bulb that is designed for reptiles into the enclosure. Don’t forget to include ultraviolet (UVB) lights since they’re rich in Vitamin D3, which stimulates a bearded dragon’s calcium intake to counteract its susceptibility to deficiency. There’s no set number of artificial lights you must install, considering that it depends on how big the enclosure is. But generally, one UVB light and heat bulb should be enough, especially if your enclosure is average-sized.

Besides lighting, allow heat to circulate throughout the enclosure by ensuring the flooring retains it—or at least some of it. There’s no need for something as fancy as insulated flooring. All you need to do is manage its substrate since it serves as your beardie’s bathroom.

Considering it’s designed for moisture to sink at the bottom, cleaning is necessary to retain the additional warmth that your beardie prefers. Avoid using sand or gravel as a substrate. Otherwise, their gastrointestinal tract might be affected after consuming it accidentally.

Stick To A Routine

Despite being intelligent creatures, bearded dragons aren’t as invested in schedules the same way dogs are. However, having a routine is more for your sake than your beardies’. After all, ensuring they stay in good health takes a lot of work.

Bearded dragons only need to bathe two to three times a week. This not only cleans the dirt off but also hydrates beardies and even helps with their shedding. You should bathe them in shallow, lukewarm water enough to cover their feet.

Another thing that must be considered is exercising your beardie. After all, bearded dragons have delicate health that makes them susceptible to many health conditions. Taking them outside to exercise and soak in some Vitamin D should help improve their well-being. But don’t let them roam outdoors without a proper reptile leash—otherwise, accidents might happen.

While caring for bearded dragons, ensure that cleaning their enclosure is also included in the schedule. Considering how frequently they defecate, disinfect the entire terrarium with a bleach and water solution and scrub the rest of the dirt. Once you’re finished, don’t leave the enclosure smelling like bleach. Rinse all surfaces with water until the smell of bleach goes away.

Pay Attention To Their Behavior

Considering their intelligence, bearded dragons exhibit all sorts of behavior and emotion that might surprise those who know little about reptiles. But studying these cues enables you to understand what your beardie wants. For example, standing on its hind legs to lean on the glass might seem cute. However, this may indicate that your beardie is stressed and wants to get out of its tank.

As you can see, some of these behavioral cues can hold much more concerning signs. But as long as you provide them with their essentials, it could help narrow down your guessing game and get you straight to the bottom of it.

Despite their spiny exterior, bearded dragons are known to be social creatures. However, considering they’re still settling into a new home, it’ll take some time before they warm up, approximately a couple of months at max. But that mostly depends on their personality, so it’s up to time and effort on your part to get them to warm up to you.

Although they’re a great pet for beginner reptile lovers, that doesn’t mean taking a bearded dragon home without any preparation is right. Because even though they have ‘dragon’ in their name, these sweet creatures tend to be delicate in some areas. But what seems to be a demanding task eventually becomes easier once you get the hand of handling your beardie.